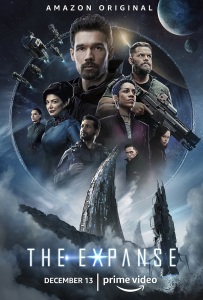 The Expanse might just be the best hard sci-fi series on TV, and in Season 4, it’s heading to uncharted territories — both in the series and in real life. Following the epic Season 3 finale, which found the crew of the Rocinante heading through the Ring Gate into new worlds, the new season will take us through to the other side, where they touch down on the unknown planet Ilus and discover the ruins of a long-gone civilization. And The Expanse is doing it all on a new home, making the move to Amazon Prime Video after the heart-breaking Syfy cancellation.

Fortunately, Amazon saved the day and if the new trailer is any indication, Season 4 appears to be returning with even bigger sets and better production value (already a massive strength for the series, but you can’t mess with that Amazon $$$), including some epic space battles, and of course, new worlds to explore.

Speaking of which, Amazon debuted the first episode at New York Comic-Con today, but for those of us who weren’t in the room, they also launched a new teaser — set to John F. Kennedy’s “We chose to go to the moon” speech. And with the promise of tensions heating up between the Earthers, Belters, and Martians, you can bet the series is on track to continue its tradition of historical allegory and real-world parallels as it digs into the politics of space colonization.

Season 4 of The Expanse premieres Friday, December 13 on Amazon Prime Video. Watch the new teaser below, followed by the official synopsis.

Here’s the official synopsis for The Expanse:

Season 4 of The Expanse begins a new chapter for the series with the crew of the Rocinante on a mission from the U.N. to explore new worlds beyond the Ring Gate. Humanity has been given access to thousands of Earth-like planets which has created a land rush and furthered tensions between the opposing nations of Earth, Mars and the Belt. Ilus is the first of these planets, one rich with natural resources but also marked by the ruins of a long dead alien civilization. While Earthers, Martians and Belters maneuver to colonize Ilus and its natural resources, these early explorers don’t understand this new world and are unaware of the larger dangers that await them.