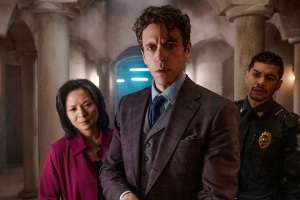 Peacock has given a series order to Dan Brown’s Langdon (fka Langdon), based on Brown’s best-selling thriller novel The Lost Symbol.

The Ashley Zukerman-starring Dan Brown’s Langdon, produced by CBS Studios, Imagine Television Studios and Universal Television, was originally developed by NBC and was ordered to pilot by the network last year. It was one of two 2020 drama pilots which NBC committed to filming last summer; the other Original Joe, remains in strong contention, I hear.

Langdon’s pickup by Peacock illustrates the integration of NBCU’s entertainment portfolio under Susan Rovner, Chairman, NBCUniversal Television and Streaming. This is the first major cross-division pickup since Rovner joined NBCU though I hear she and her team also considered NBC’s three 2020 comedy pilots for both the broadcast network and Peacock. (Of the three, American Auto and Grand Crew were went to series, both at NBC.)

“The team was blown away by this pilot and its enormous potential to become a big, binge-worthy hit, and our new structure enables us to move it to Peacock and give it every opportunity to make that happen,” said Rovner. “Our ability to pick up a great show is no longer limited by the confines of a network schedule, giving us the freedom to say ‘yes’ to shows we love and then find them the perfect home across our portfolio.”

Written by Dan Dworkin and Jay Beattie, Dan Brown’s Langdon follows the early adventures of famed Harvard symbologist Robert Langdon (Zukerman), who must solve a series of deadly puzzles to save his kidnapped mentor and thwart a chilling global conspiracy.

The Last Symbol is the third Brown novel featuring the character of Langdon, following Angels & Demons and The Da Vinci Code, and is set after the events of Da Vinci Code.

The Langdon TV series is a natural extension to the Robert Langdon universe Imagine Entertainment had built on the feature side at Columbia Pictures with three movies produced by the company and directed by principal Ron Howard, which starred Tom Hanks as Langdon: The Da Vinci Code, Angels & Demons and Inferno, based on the fourth book in the series. The company also had developed a movie adaptation of The Lost Symbol at Sony as a follow-up to Angels & Demons before the studio went with Inferno instead.

“I’m absolutely thrilled to be working with Ron and Brian again on another Langdon project,” said Brown. “We’ve all wanted to make ‘The Lost Symbol’ for some time now, and I’m grateful to CBS Studios, Imagine Television Studios, Universal Television and Peacock for joining forces to make this project a reality. Dan Dworkin and Jay Beattie have written a phenomenally captivating script, and the casting and performances are pitch perfect.”