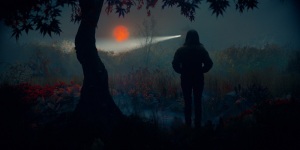 Lisey’s Story, an upcoming Apple TV+ series based on the 2006 Stephen King novel of the same name, has just released its debut trailer. Starring Julianne Moore and Clive Owen, the first two episodes will release on June 4 followed by the next six coming out on a weekly release schedule.

The series follows Moore’s Lisey Landon as she struggles to deal with the loss of her husband, Owen’s Scott Landon, a famous novelist. As her world unravels, Lisey will have to confront her past and the memories she has repressed from her marriage to Scott. Lisey will also have to deal with a menacing Dane DeHaan, who plays the mysterious Jim Dooley. King himself has written the series, and after the most recent mixed response to the CBS series The Stand, perhaps what an adaptation of a King story needs most is the man himself directly involved in the project.

DeHaan previously told Collider that King was not just writing all of the scripts, but was there on set with everyone himself.

“It’s been really great. He’s on set a lot. He’s very into what we’re doing and the experience. It’s also fun to help to sometimes craft it with him. He’s writing extra things. Pablo Larraín, the director, has a very clear vision, and there’s a real collaboration going on that wouldn’t be possible, otherwise. He’s such a big deal that what he writes is so holy that, in order to really collaborate or change things sometimes, it feels better having him there and having his blessing and knowing that he’s happy with it. It’s been really fun. It seems like we’re making something really cool.”

The passion King clearly has for the project makes it exciting to see how it has all come together. When paired with Larraín, the project is shaping up to be an intriguing one. Considering how transcendently haunting Larraín’s previous work has been, with 2016’s Jackie and 2012’s No, the director has a lot to bring to the table. Witnessing the remarkable and often nightmarish visuals already on display in the trailer is a good sign of what is to come.

Check out the trailer for Apple TV+‘s Lisey’s Story, premiering on June 4.