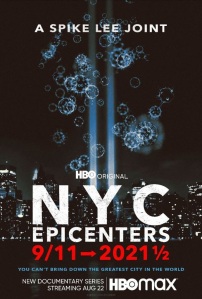 HBO has released the official trailer for the upcoming docuseries NYC EPICENTERS 9/11➔2021½, which hails from acclaimed director Spike Lee (HBO’s 4 Little Girls, When the Levees Broke) and covers the history of New York City in the 21st century. The four-part documentary essay, produced and directed by Lee, will debut August 22 on HBO and be available to stream on HBO Max.

The documentary centers around everything that’s happened in the past 21 years in New York City. The Big Apple has been through a lot in the past couple of decades, both good and bad. Between the 9/11 attacks to the COVID-19 pandemic to the Black Lives Matter protests, it has been a tumultuous time for the city and the denizens of its five boroughs. Lee explores it all through the eyes of the people who witnessed it first-hand, conducting over 200 interviews with New York City residents from all walks of life.

People like Congresswoman Alexandria Ocasio-Cortez, actor Rosie Perez, former Daily Show host John Stewart, actors Steve Buscemi and Jeffrey Wright, and CNN news anchor Van Jones sit down to talk with Lee about their personal experiences over the past two decades while their city has gone through its ups and downs. Lee also gives the floor to 9/11 first responders to lend a voice to their valiant efforts at Ground Zero and the personal tragedies they’ve suffered since that horrific day in 2001. The trailer alone is an emotional and moving experience, which means the actual documentary will likely have a powerful impact on anyone who watches it.

Lee directs and produces the film, with Felipe Vara De Rey and Kerwin Devonish serving as directors of photography, and Adam Gough as editor. Original music for the docuseries is composed by Terence Blanchard. Jason Sokoloff serves as co-producer, with Judy Aley as archival producer. Nancy Abraham and Lisa Heller executive produce for HBO, and Sara Rodriguez is senior producer.

NYC EPICENTERS 9/11➔2021½ debuts Sunday, August 22 at 8 p.m. ET on HBO, with episodes also available to stream on HBO Max. It’s a four-part series, with the first two episodes debuting the same night and the last two airing each week until the finale on September 11. Check out the trailer for yourself below: