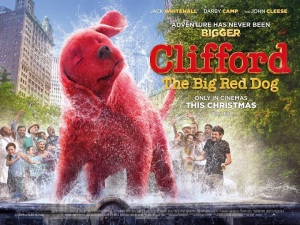 Synopsis – A young girl’s love for a tiny puppy named Clifford makes the dog grow to an enormous size.

My Take – The Hollywood nostalgia overdrive to cash in on family audience continues with this live action adaptation of a series of children’s books by author Norman Bridwell, the first of which was published in 1963, but amassed much fame when it was turned into a PBS Kids series, which ran from 2000 to 2003, and was followed up by a prequel series and an animated film in 2004.

Personally I had little prior knowledge of the franchise, so I went in expecting a silly and harmless film about an oversized red puppy and his adventures with a 12-year-old owner, but what I didn’t expect was a 96 minute straight-face walk through one of the most heavily clichéd family films of probably the decade.

Backed by inconsistent CGI and lazy writing (despite having five writers on board), here, director Walt Becker (Alvin and the Chipmunks: The Road Chip, Van Wilder) just wastes his star-studded ensemble cast of comedians and years’ worth of source material on a film that doesn’t have anything new to offer and plays on every trope we’ve seen before.

Sure, as a kids film (especially preschoolers) it is pretty cute, simple, and offers a variety of familiar canine activities to keep things entertaining, but the rest of the audience are going to find it hard to get past the drop down of stale jokes and a clunky script that was trying to update a story that was created in 1963. 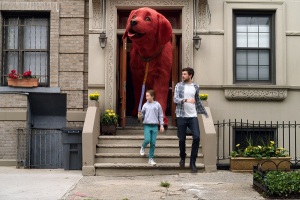 Set in New York, the story follows Emily Elizabeth Howard (Darby Camp), who having recently moved to the city with her mother, Maggie (Sienna Guillory), is feeling isolated and out of place at her new private school. The news that her Uncle Casey (Jack Whitehall), an affectionate but irresponsible slacker, will be baby-sitting her till her mom comes back from a business trip does nothing to make her feel better.

However, when they cross paths with Mr. Bridwell (John Cleese), an eccentric animal rescuer, they are introduced an irresistible red colored little puppy, Emily perks up considerably. But further complications arise the following morning, when Emily awakens to discover that her tenderness toward the puppy who she named Clifford has magically transformed him, overnight, into an elephant-sized giant.

But as Clifford innocently begins to wreak all manner of slapstick havoc, Emily and Casey find themselves contending with Zack Tieran (Tony Hale), a scheming owner of a biotech firm, who claims that his company’s technology brought about Clifford’s sudden, massive growth spurt.

Of course what follows is all the standard children’s film gags and story beats. The main characters have to hide Clifford while someone is looking through the house, and it just feels like every scene you have seen in films about a kid who befriends something peculiar. And of course an evil corporation has to be brought in to complicate things for the child heroes. 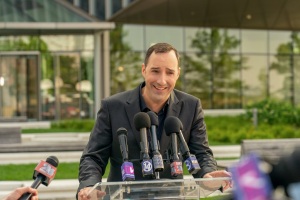 The biggest problem with the film is that the core plot is woefully underdeveloped. The film takes the basic premise of the film and goes down the most standard, conventional route possible. Too much of it relies on the spectacle of a giant large puppy to keep the audience’s attention. Rather than coming up with a strong, compelling narrative to justify a feature film, director Walt Becker relies on a nostalgic interpretation of what a family film is supposed to look like and leans into that a bit too much.

While Clifford is definitely cute, the script lacks any depth, relying upon Whitehall to carry and deliver the comedy, so much so that Casey feels simultaneously exaggerated and two-dimensional.

Yes, despite its flaws, the film has flashes of fun, and Darby Camp and Jack Whitehall have good onscreen chemistry. To her credit, Camp brings a lot of heart to the role of Emily Elizabeth, and does her best to sell her friendship with Clifford.

In other roles, Tony Hale, Sienna Guillory, Izaac Wang, Russell Wong, David Alan Grier, Kenan Thompson and John Cleese are efficient. On the whole, ‘Clifford the Big Red Dog’ is just another standard family film that does little to elevate the IP.