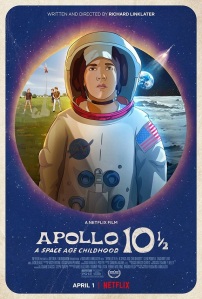 We all get curious to know about production details when a different-looking movie comes out. The same is true for Apollo 10 ½: A Space Age Childhood, the new Netflix animated movie that uses the rotoscoping technique to give it a unique style. In a new featurette, the streamer invited the film’s crew to dive deep into the making of the story — which centers around a kid who believes he was invited by NASA to man a mission to the Moon.

The making-of video reveals that the 1969 Houston atmosphere was evoked by using verbal accounts from people who lived there during that time. And because the team wanted no reference from modern technology in the look and feel of the movie, the art was hand-drawn and handmade in order to give it a retro vibe, on top of making it look timeless.

The featurette also reveals that 150 people worked on several elements of the animation, and because of that, Apollo 10 ½: A Space Age Childhood isn’t just one style, but rather a compilation of crafts that comes from artists’ visions, archive footage, home movies and even photos that helped make it all come to life.

Even though this combination might sound as if it resulted in something far too imaginative, director Richard Linklater reveals that he didn’t want it to look real: the idea of the movie is to play out like a fading memory, since it is told from an adult character’s recollection of that time. He also spoke about his personal connection to the story that he himself wrote:

“[…] there were 600 million people watching [Apollo 11’s launch] on TV. It was a big experience for the world, and so as I thought about this movie, I was trying to capture that phenomenon. I think that’s what I’ve always tried to do with my movies, just what it feels like to be alive, what it feels like to be human at a certain time in history. ‘Apollo 10 ½: A Space Age Childhood’ is both an exacting recreation of 1969 as we headed to the Moon and a recreation of a kid’s fantasy about being a part of all that. […] The film for me is too personal, it’s like, almost a childhood memoir. That was a fantasy I actually had. […] I wanted to make a film that actually kind of captured what it was like to live in Houston at this very moment in time.”

You can stream Apollo 10 ½: A Space Age Childhood on Netflix now.

Check out the behind-the-scenes featurette below:

Here’s the official synopsis for the movie:

Apollo 10 ½: A Space Age Childhood tells the story of the first moon landing in the summer of 1969 from two interwoven perspectives – the astronaut and mission control view of the triumphant moment, and through the eyes of a kid growing up in Houston, Texas who has intergalactic dreams of his own. Taking inspiration from Academy Award-nominated® filmmaker Richard Linklater’s own life, Apollo 10 ½: A Space Age Childhood is a snapshot of American life in the 1960s that is part coming of age, part societal commentary, and part out-of-this-world adventure.