Synopsis – In 1979, a group of young filmmakers set out to make an adult film in rural Texas, but when their reclusive, elderly hosts catch them in the act, the cast find themselves fighting for their lives.

My Take – With films like The Witch, Hereditary, Midsommar, The Killing of a Sacred Deer, The Monster and Saint Maud filling up their catalogue, it is suffice to say A24 have branded themselves as the curators of modern elevated horror.

Though their latest horror film also takes the familiar dread filled unhurried approach to unraveling the horror story, the added expectations comes from the attachment of writer/director Ti West, the horror auteur whose filmography consists of buzz filled indie features like The House of the Devil (2009), The Innkeepers (2011), In a Valley of Violence (2016) and one of the better found footage films, The Sacrament (2013), who continues to prove himself to be an incredibly astute visual filmmaker.

For his first film in six years, director West returns to his horror roots to draws upon the influences of 1970s slasher flicks, especially Tobe Hooper‘s The Texas Chainsaw Massacre (1974), and backs it up with a fairly original premise and slasher tropes, all to act as an antidote to several recent horror trends. Resulting in a fraught, confident slow-burn horror that explores its themes and character arcs well before going all out in a hellish gore filled finale, where there is no place that is truly safe.

Yes, it doesn’t completely live up to expectations and is no doubt flawed in its presentation, however, aided by a great cast, it manages to be a worthwhile slasher. More importantly, it definitely leaves one excited for its prequel film, Pearl, which was secretly shot back-to-back with Mia Goth reprising her role. 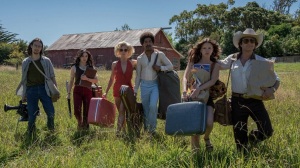 While it has all the standard machinations of your typical slasher film, the premise is unique, and the stylistic choices here are effective and inspired by the past in a way that does not feel gimmicky or cheap.

Though, keeping in tradition with A24‘s track record, it takes a full hour before anything overtly violent takes place. For more than half the film, we get little ominous hints that something may be wrong. Meanwhile, allowing the audiences to truly connect with the characters, who are fleshed out from the word go, making their every interaction delightful as they head towards inevitable doom. 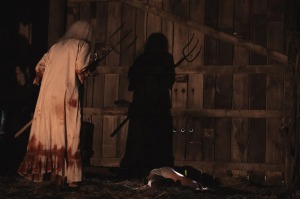 But something awakens in her at the arrival of the youthful bunch, in particular with Maxine. Pearl’s judgement of Maxine, despite the fact she reminds her of herself, is steeped in her disdain of the comparatively youngster’s youth and appearance. This dynamic makes for quite a few juicy interactions that are laden with unbridled desire, a desperate need, and an understanding on the part of the audience for Pearl’s actions, as well as that of Maxine.

Yes, the gore itself is plentiful and as if the violent sequences weren’t viscerally disturbing enough, seeing characters we’ve invested in so heavily undergo any sort of bodily trauma hits with more impact, like a character suffering a minor foot injury ends up evoking more compassion from the audience than the brutal deaths of figures from other slashers.

Even though the film’s payoffs aren’t always satisfying, it remains fun, and when it slows down to humanize its villains, it’s oddly reflective and melancholy, in a way few modern slasher films dare to be.

Performance wise, Mia Goth leads the show with her double role, who plays her parts surprisingly well adding enough depth to her main role to want to see her make it out alive. Brittany Snow kills it with her unexpected sassy portrayal, making her the most likable of the group. Jenna Ortega continues her excellent run of innocent but dynamic turns.

Martin Henderson turns up his best Matthew McConaughey inspired charm, Scott Mescudi is likable, and Owen Campbell is endearing. While Stephen Ure is menacing under prosthetics. On the whole, ‘X’ is a nice old-fashioned slasher that is viscerally violent.