Synopsis – The television reporter Ángela is rescued from the building and taken to an oil tanker to be examined. However, it is unbeknown to the soldiers that she carries the seed of the mysterious demonic virus.

My Take – Horror movies are never on my preference list, provided they are found footage! So for obvious reasons, I’m a huge fan of this Spanish horror series especially the first two Rec movies. While the 1st one is widely considered a genre buster (remade into Quarantine), its the 2nd one which managed to build on the original, while delivering some truly intense moments and hitting all the high marks. They were intelligent, smart films, a rarity in horror movies. However, Rec 3 was a truly awful mess! Luckily based on this new one you can pretend that never happened. 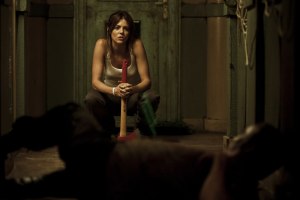 While directors Jaume Balagueró and Paco Plaza collaborated on both Rec 1 & 2, they decided to split up directorial duties among the last two films. After sitting through a painful viewing of Paco Plaza’s Rec 3, It was pretty obvious that the talent was laid in the hands of Balagueró. The climate of the first & second film, inside the building was wonderful, this time he has tried to recreate the same atmosphere inside a ship! Here, the films continues moments after the end of Rec 2, as they try to rescue Ángela Vidal (Manuela Velasco) while being attacked by some familiar infected people. The scene shifts to a lab in a cargo carrier in the middle of the ocean, where she & her rescuers are being experimented upon. After a slow-burn first act, the action kicks into high gear as we are told the hope for saving, or destroying the virus lies on that ship. Director Balagueró is a true horror movie buff, as this film is littered with references from all over the genre! But unfortunately some of the elements set up in the earlier films, seem damn right cheesy! Especially the demon virus, which seemed like an authentic idea earlier has transpired into an alien like parasite, which seems pretty dumb. Plus I was alright with the directors’ decision to move past hand-held, but that does not seem to have helped with shaky cameras. And while the movie captures some moments of pure intense action and manages to outdo Rec 3 in every way possible, it does not twist the genre like the first two films did, nor will it blow you out of the water. 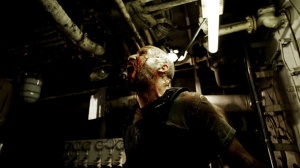 Even the story weakens a bit because once you see the lab you know what is going to happen. Lights do flash a lot and the camera moves a lot and is zoomed in for most of the time so it’s a on and off of seeing what is going on. The reason is rather simple, the surprise of REC couldn’t be done again. Probably the best surprise were the characters, by turning the tables on usual stereotypical characters, and by the end, I was rooting for the unlikeliest of them. In the end, Rec 4 is a nearly satisfying, very gory, visceral and a nearly intense conclusion to a unique series. While the first two movies were made with the aim of creating genre-busters, Rec 4 is made for the fans who’ve followed the series, and Angela Vidal from the start & not for anyone else!