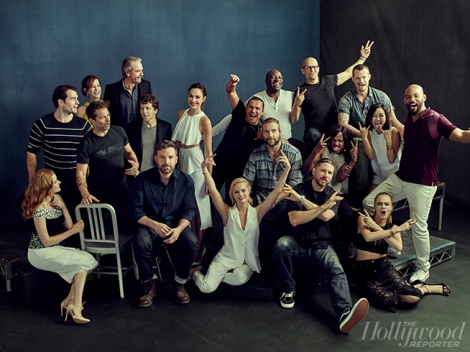 Superheroes and super-villains collided — quite amicably, we must say — at The Hollywood Reporter‘s top-secret Comic-Con photo shoot.

After stunning the Hall H crowd on Saturday with new footage, 17 actors, as well as directors Zack Snyder and David Ayer, from Warner Bros.’ Batman v. Superman: Dawn of Justice and Suicide Squad — together comprising the long-awaited first phase of Warners’ DC Cinematic Universe —  zoomed off for what would be their first photo together.

While both casts appeared during Warner Bros.’ panel, they didn’t take the stage at the same time. So THR‘s photo shoot was not only the first time that the two casts got together, but for many it was their first time meeting one another entirely.

Jai Courtney mightily shook hands with Jesse Eisenberg while Henry Cavill chatted with Will Smith, who introduced him to Jay Hernandez. Cara Delevingne and Gal Gadot posed for a selfie together.

The group was on a whirlwind trip, to say the least. Ayer had been working on the film in Toronto until 1 a.m. Friday night, then woke up the next morning to fly with his cast to San Diego. They were in San Diego for a little under three hours before having to rush back out to the airport at 1 p.m. to head back to Toronto. Ayer, who was trying to convince his handlers to stop to get burritos before he headed back to Canada, needed to return to shooting second unit the next day.

Onstage, Ayer touted his villain-focused movie: “Who’s got the best bad guys out there? DC Comics,” he said. “I’m not trying to start no East Coast-West Coast feud with Marvel Comics, but someone has got to say the truth.”

The footage he showed was surprisingly dark in tone, but at the shoot Ayer told THR of the film, “The real shock is how hilarious it’s going to be.”

Smith, who was the only cast member to speak (if only a few sentences) onstage during the Suicide Squad presentation, relished leaving the crowd wanting more.

“This was just a little taste,” he told THR backstage. “We’ll see them again next year.”

If the movies are part of a big DC family, Batman v. Superman is the older, more mature sibling on which the weight of responsibility falls. Suicide Squad is the bratty little kid, chewing bubble gum and tagging walls.

Each cast has bonded in different ways. Loud and boisterous, the Suicide Squad cast was bonded by an attitude fueled by brashness and exuberance.

“We’re very much a squad,” said Robbie, with her co-star Delevingne joking, “We should start a dance squad.” Indeed, the cast was seen taking plenty of selfies together, laughing at inside jokes and throwing up their hands in faux-squad poses during the shoot.

The cast of Batman v. Superman looked on with bemusement, like they weren’t quite sure what to do with the family member that steals cars for a living. They were bonded too, it just showed in a more subdued way — like when Adams jokingly sat on Affleck‘s lap when they were taking their seats for the shoot. But don’t let their quiet demeanor fool you: Adams photo-bombed Delevingne and Gadot with aplomb.

And while they may be only newly acquainted, there’s already a friendly rivalry brewing between the two casts, with the Suicide Squad group joking that they’d eat all the sandwiches before the Dawn of Justice cast got there. Affleck, meanwhile, joked that he wouldn’t be waiting on the slacking Suicide Squad to take his group photo.

Click the photo below to see a larger version of THR‘s exclusive image, as captured by photographer Joe Pugliese. 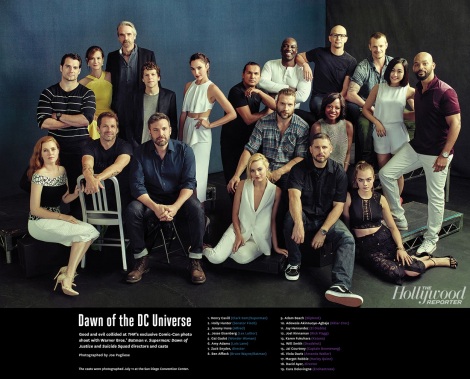 Via The Hollywood Reporter