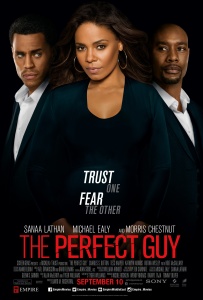 Empire Movies & Riot Play Films – A Non Profit U.A.E Based Film Making Team are here to give out 5 pairs (10 singles) of invites to the premiere of the romantic thriller “The Perfect Guy” starring Sanaa Lathan, Michael Ealy & Morris Chestnut. David M. Rosenthal has directed the film. The film releases on September 10th, 2015 all over U.A.E!! #ThePerfectGuyME #ThePerfectGuy

All you gotta do is answer the below question & tag as many as people possible in the post!!

The lead pair of this film, Morris Chestnut & Sanaa Lathan, starred together in a romantic comedy as well! Which one is it?

Synopsis – After a painful breakup, successful lobbyist Leah Vaughn (Sanaa Lathan) jumps into a passionate relationship with a charming stranger (Michael Ealy). When her ex-boyfriend (Morris Chestnut) resurfaces in her life she has to figure out who she should trust and who she should fear.