Synopsis – A cryptic message from Bond’s past sends him on a trail to uncover a sinister organization. While M battles political forces to keep the secret service alive, Bond peels back the layers of deceit to reveal the terrible truth behind SPECTRE.

My Take – Bond films have been celebrated worldwide for years. And if there was anything we learnt from Skyfall (2012) it’s that director Sam Mendes can make a damn good Bond film, veering away from the over-the-top, explosive nature of the franchise, and focusing more on Bond’s personal life and his vulnerability. Well what can be said? He did it again! If you thought Skyfall was a more personal story of James Bond himself, then this 24th Bond feature is the closest we can get to unraveling his character. Bringing in a conclusion to a story which started back in Casino Royale (2006), this film will definitely appeal more to those who were fans of the early films in the franchise, most notably ‘You Only Live Twice‘ whose inspiration brings back one of the finest villains to ever face Bond. Mendes has since seemed to take a new direction on Craig‘s series of films and led away from the gritty, thriller aspect that ‘Casino Royale‘ and ‘Skyfall‘ had and instead propelled the film as an action spectacle, full of beautifully orchestrated stunts, stunning cinematography and non-stop explosive action. The story is bigger than Skyfall, Quantum and Casino Royale all together. And that’s funny because this movie is really connected to all of them (another thing that makes me love Daniel Craig’s Bond era). And marrying the credible word (political games, drones included) with the preposterous touch of any of the classic movies of Bond (Oberhauser, his hidden base, his plan) as well giving the Bond past a lot more of light and an effective closure. Running for about 148 min run time, this is one of the longer Bond films but at no time did I find myself wondering how much longer it would be going on (OK maybe a particular staff meeting scene was tad too long). The viewer is immediately gripped in the opening scene, which appears to be one long tracking shot. We then get an explosion, chase and finally a fight in a helicopter all before the opening credits! From then on we get a number of great set-pieces including car chases, Bond rescuing Madeleine from would-be abductors as he chases their cars in a plane and numerous fights and shootouts. 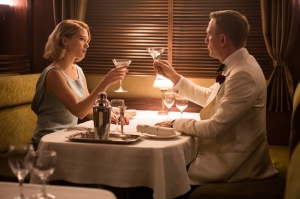 The story follows James Bond (Daniel Craig), a double-0 spy working for the Majesty’s service, who stumbles upon a cryptic message from his past, & is sent on a trail to uncover the mysterious organization behind a number of terrorist attacks around the globe. With the double-0 program under serious threat, M (Ralph Fiennes) is left fighting political forces in order to keep the secret service alive. Bond, on his mission, discovers the organization known as Spectre, headed by Franz Oberhauser (Christoph Waltz), and soon realizes the terrible truth behind their intentions. This firm sits firmly in the middle of the four movies in the Craig era. It’s not better than Skyfall & Casino Royale, but it is better than Quantum. Director Sam Mendes and Daniel Craig give us another triumph after the polemic “Skyfall” and this time both have managed to get a perfect balance between that intimate psychology from the previous outing and the nostalgia from a classic Bond movie (with quality, not just passable) that hadn’t had hit the theater in a very while. By that way we found ourselves in a very Bond centric movie (perhaps the only one in the whole franchise in which Craig is the absolute protagonist without being overshadowed even by the handsome villain) that explores and expands the character beyond the limits from the last third of Skyfall and a truly genuine adventure full of suspense and crazy twists to maintain the attention. The humor is back (a drunken conversation with a rat makes the funniest and most hilarious moment) even at times that you couldn’t imagine (the torture scene is intense, much better than the classic one in Casino Royale, but handed with dark laughs at some parts). One of the most important features of any Bond film is its action sequences. The film opens with a spectacular fight aboard an out of control helicopter above the streets of Mexico City. It’s a thrilling start however, none of the action sequences that come after really top it. There’s a car chase between Bond and Mr Hinx through the streets of Rome yet it all feels a little flat as they are just about the only ones on the road. There is no sense of peril to the sequence and it feels like you are watching a car advert at times but there is a nice touch involving Bond trying to speed up the older driver in front of him. The train fight between Mr Hinx and Bond is another highlight and a great throwback to the brutal fight between Bond and Grant in From Russia With Love. The choice to use no music in this scene is a master stroke and heightens the sense of brutality this scene possesses. It tries hard to touch a lot of plots into a big one to the final part of the film and that implies to focus on some parts more than others. This was probably what I was looking forward to most; the idea that the last three Bond movies were episodic and building up to a massive conclusion. In some ways it’s exactly what I wanted. All the three previous movies are referenced and mentioned multiple times throughout, implying some grand plot weave planned out well in advance (or at least cleverly retrospective).

Le Chiffre, Silva, and the deaths of M and Vesper are key talking points. Mr White (from the end of Casino and beginning of Quantum) makes a pivotal cameo, yet Greene is largely forgotten (he’s mentioned in passing once, probably for the best). We even get a nice speech from Oberhauser (the main antagonist)about how he was behind everything that has vexed Bond over the last nine years. Daniel Craig took to the role of James Bond like a duck takes to water back in 2006 however, here, we see Craig in a whole new light while playing Bond. We see Craig more Bond-like than in any of his previous outings. Daniel Craig once again embodies a character much of his own making, he is a realistic bond that also manages to pull off the characters suave nature. While we still see the vulnerable side to Craig‘s Bond, in Spectre Craig is the suave and sophisticated 007 that some had doubts about him ever becoming. Craig once again delivers a fine performance as Bond, growing more and more into the role with each film. I would be happy to see him continue playing Bond for as many films as possible. Lea Seydoux stars as Dr Madeleine Swann, a key component in Bond’s quest to find SPECTRE. Seydoux does her best with what she’s given, it’s just unfortunate that her character feels a little underwritten. Unfortunately, Monica Bellucci fares a little worse than Seydoux and ends up feeling way too underused, coming across as the woman just ‘there’ for Bond to sleep with. Then there are the villains of the film. Craig‘s Bond films have seen some good villains already in the form of Le Chiffre from Casino Royale or Silva from Skyfall, and Christoph Waltz‘s Franz Oberhauser is no exception. As a senior member of SPECTRE, Waltz is wonderfully sinister and he brings all of his quality to proceedings. Dave Bautista also stars as Mr Hinx, an assassin ranked highly within SPECTRE and easily the greatest physical threat that Craig has ever faced as Bond. Bautista fills the screen with his intimidating presence and makes Bond look like your average man but rather annoyingly, we don’t see enough of him. Ralph Fiennes as M, Ben Whitshaw as Q and Naomi Harris as Eve Moneypenny play their roles with great confidence and subtlety. These characters have a sub plot where they are trying to help bond on his mission to find Spectre from the sidelines while struggling to battle political pressures of M’s new Boss C played by Andrew Scott and although his role isn’t particularly interesting in the film, he works as a worthy adversary towards M and serves the overall story well. On the whole, ‘Spectre’ may not be as exhilarating as ‘Skyfall’ was, but it surely serves as an epic (possibly) conclusion to Daniel Craig‘s version of Bond. Nevertheless this is an ultimate British action film and one of the finest installments of the whole series!