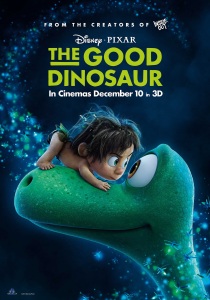 Italia Film Middle East & Riot Play Films – A Non Profit U.A.E Based Film Making Team are here to give out 10 exclusive invites (5 pairs) to the premiere of a new Animation/ Adventure/ Comedy from Disney Pixar – “The Good Dinosaur” directed by Peter Sohn, and starring the voices of Jeffrey Wright, Anna Paquin & many more. The The film will release on December 10th, all over U.A.E!! ‪

The advanced screening of the film will be held at Reel Cinemas, The Dubai Mall on Monday, November 30th, 2015 at 8:00pm.

All you gotta do is answer the following question & tag as many friends as possible:

Peter Sohn makes his feature length debut with this film. Before directing this, he has contributed to many other Disney-Pixar films especially in the voice department. So which of the following film has Peter Sohn has NOT lend his voice to?

a) Monsters University
b) Ratatouille
c) Inside Out

Synopsis – An epic journey into the world of dinosaurs where an Apatosaurus named Arlo makes an unlikely human friend.