Synopsis – A father is without the means to pay for his daughter’s medical treatment. As a last resort, he partners with a greedy co-worker to rob a casino. When things go awry they’re forced to hijack a city bus.

My Take – This film is such a curious project, an amalgamation of so many different types of films that don’t quite expect to work together. The first half of the film is all Tarantino-inspired dialogue and Guy Ritchie-inspired jump cuts, but the bulk of the film set in the bus is almost a beat for beat rehash of Speed. In fact, director Scott Mann could’ve just billed this as the “gritty reboot” of Speed and probably gotten away with it. British director Scott Mann, known for the sympathetic & very enjoyable The Tournament (2009) does a remarkable job in creating action sequences worthy of a small Hollywood film, with a budget that barely exceed $ 20 million. Even emphasize the work of stuntmen who manage to make some technical prowess during a sequence where the attack police and enter the buses running at full speed on the highway. In addition, Mann manages to be a great communicator of emotions with a few scenes that will move you. No, this is not the best film of 2015, but at a time of year when all the entertainment aim to win the Oscar race this B action film comes as a breath of fresh air with an entertainment without the fuss. Despite some problems of a scenario that would have benefited from a replay, the movie allows you to have a good time and be able to constantly stay on the edge of your seat, while you shed a few tears at the opportunity. It’s neither innovative as action movie nor does it have flamboyant group of thieves pulling off intricate steal. Its biggest assets are the actors who perform particularly well to make their characters that much more approachable. The relatively simple premise also works like a vending machine, which the audience can just put in a coin and leave with the result without overly complex build-up. Although I doubt that I will be able to remember this film within a few years, there is one thing that this feature film succeeds marvelously: give us the taste of (re) view Speed, the best action movie taking place on in a bus. As you can imagine, this film was not a shadow of a chance to claim this title, but that does not mean that it is able to do great things. The story follows Vaughn (Jeffrey Dean Morgan), a man whose daughter needs surgery for a chance at a longer life; a chance she will lose if her father doesn’t come up with $300,000 within a few days. Vaughn works at a casino and, after a failed attempt to simply borrow the money from the casino owner Pope (Robert De Niro), decides to join in a robbery that a coworker Cox (Dave Bautista) has planned. When things (apparently) go badly during the robbery, they hijack a bus and try to flee the country with a cop Kris (Gina Carano) & casino owner’s thug Dog (Morris Chestnut) hot on their trail. 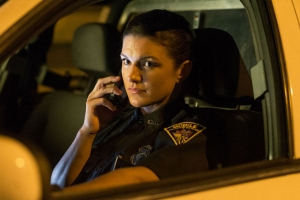 This film has a sense of timing (Consider the sequence where our criminals plan their move.) And offers bold enough turnarounds for entertainment on Friday evening, some turnovers that we will never see it coming. Among these, we can reveal when a local TV show, accidentally killing a hostage live, offering a satirical unintentionally funny moment. Nevertheless, the greatest strength of the script lies in the subtle parallel between it manages to make the character of Vaughn and Pope, showing that these same two men in similar paths throughout the feature film, even if the one steals another. This allows these two characters to experience a pretty nice evolution that will end in a final poignant. Despite being comprised almost entirely of scenes from Speed, The Taking of Pelham One Two Three, and The Usual Suspects, the screenplay by Stephen Cyrus Sepher and Max Adams keeps the not-quite-surprises humming along at a reasonably engaging clip. Director Scott Mann handles the action well, and the film cruises along at a steady, clipped pace. There are several “big twists” that present themselves as the film draws to a close, but if you’ve seen any genre film before, you’re going to see them coming. That predictability is what hurts the film in general. So much of this film is just patched from other action movies that there’s an unfortunate “been there, done that” vibe to the whole thing. Subplots abound, making room for The Pope’s cancer diagnosis and attempts at reconciliation with a daughter of his own (Kate Bosworth). He’s also got a poisonous mentor relationship with Morris Chestnut and we witness the sinister machinations of a crooked cop, played with lip-smacking impudence by Mark-Paul Gosselaar. Still, the film also deserves credit because the script by Stephen Cyrus and Sepher Max Adams attempts to give almost all of its characters some amount of depth, instead of just having them show up and stand around. The writers of this film had a good idea, but could not figure out how to resolve it. As in he could not give it a good ending. And like I always say, you can give a movie a thumbs up if 2/3 of it is good, but make sure one of those thirds is the final act. I was enjoying this movie until the patently absurd ending and I suspect that that’s why it got a ‘limited’ run and relegated to VOD-land, they knew that they could probably return their money with the premise at that level but would probably lose it with major theatrical investment. Nevertheless, I liked the movie and found it mildly entertaining despite several flaws. The plot probably could have used some honing to make it more impactful; it is a fast-paced thriller that occasionally feels like it skipped over a chance to really delve into the plot.

A few characters just fade out of the movie at times and certain spots where the filmmakers try to build suspense are in vain because any audience member will know nothing is going to come of it, like the scene on the bridge when the cops have a chance to take out Vaughn roughly halfway through the movie, (spoiler) you know that isn’t going to happen. The film has a pretty solid cast for such kind of a story, surprisingly its them which keep the film from hitting rock bottom. Jeffrey Dean Morgan of course is the glue that holds the entire movie together. He plays the role of Vaughan perfectly. He has some swagger, some humor and some toughness all the while showing how tortured and helpless he feels in trying to help his daughter. He looks the clever yet disheveled type and the plot easily sets him as the desperate good guy. Robert De Niro has delivered his usual mafia boss performance, and still intimidating at that. The role is miles better than his recent gigs like in Last Vegas or Grudge Match. Batista also rounds up the crew as the aggressive robber. It seems that they haven’t found the perfect role for him, the mild manner support in Riddick and Guardians of the Galaxy or the silent henchman in Spectre are all right. However, he’s more convincing as a villain here and it takes advantage of his large physique. The other cast like Gina Carano, Morris Chestnut and Mark-Paul Gosselaar do a good job on their parts, which make it a modestly balanced cast. Kate Bosworth is alright in a cameo. On the whole, ‘Heist‘ or ‘Bus 657′ is a modestly enjoyable, handsomely produced and (mostly) well acted affair; something to put on in the background as you reorganize your Blu-ray collection. Again, I enjoyed the movie and will probably recommend it to friends and family who enjoy a nearly-mindless thrill ride. I even fell for two of their “watching the wrong hand” twists- in addition to being a card dealer, Director Vaughn is an amateur magician who attempts to clue us in right from the beginning that the “magic” is happening in the hand you aren’t looking at. I won’t spoil what these twist are, but, to be honest, my response to these twists wasn’t “OMG, I can’t believe that just happened”, it was more “Oh, ok, they went with that twist”; meaning they were nice, interesting, but not unprecedented; just like the movie itself. At the very least, you’ll be able to say you got to see Robert De Niro smoking an E-Cigarette.