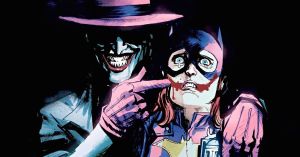 When Warner Bros. announced they were doing an animated adaptation of Batman: The Killing Joke, fans openly wondered if they would risk an R-rated version, or if they would water down Alan Moore’s brutal source material to receive a PG-13.

Tonight, EW reports that they’re staying true to Moore’s unflinching vision and that means that the movie has received an R rating. Per EW:

“From the start of production, we encouraged producer Bruce Timm and our team at Warner Bros. Animation to remain faithful to the original story — regardless of the eventual MPAA rating,” said Sam Register, president of Warner Bros. Animation & Warner Digital Series, in a statement. “The Killing Joke is revered by the fans, particularly for its blunt, often-shocking adult themes and situations. We felt it was our responsibility to present our core audience — the comics-loving community — with an animated film that authentically represented the tale they know all too well.”

For those unfamiliar with the graphic novel, it tells the definitive Joker backstory by having the Clown Prince of Crime attempt to prove to Batman that one bad day can absolutely ruin a person’s life. He uses Commissioner Gordon and his daughter Barbara as examples in this cruel demonstration, and the extent to which the Joker goes is what necessitates the R-rating.

Whether this makes the movie good or not remains to be seen. At the very least, they have Kevin Conroy and Mark Hamill reprising their roles as Batman and Joker, respectively, so at least there’s that, but the animation from Warner Bros’ direct-to-DVD line is incredibly hit and miss (The Flashpoint Paradox, for example, looks like it went out to the lowest bidder). There’s also the matter of how well they adapted it into a movie, or if this is just a translation of a story from one medium to another with no understanding of how comics flow differently than movies.

But for those who were worried that the story couldn’t be done justice with anything less than an “R”, you can put those fears at ease. There aren’t even plans for a PG-13 edition.

Batman: The Killing Joke will world premiere at Comic-Con this summer, and drop on Blu-ray, DVD, and Digital HD later this year.