Synopsis – In 1959, a decorated naval officer is accused of murdering his wife’s lover.

My Take – Due to the previous successful collaborations of writer/producer/director Neeraj Pandey & actor Akshay Kumar (in the form of Special 26 & Baby), this period set thriller has been one of the most awaited Bollywood releases since the time of its conception. Based on true crime court case of 1959, where Commander Kawas Manekshaw Nanavati, a Naval Commander, was tried for the murder of Prem Ahuja, his wife’s lover. Receiving unprecedented media coverage (at the time) and immense public sympathy, the trail resulted in the abolition of the jury system in India. While Bollywood itself adopted the whole incident with fictional reorientations, back in 1963 (Yeh Rastey Hain Pyar Ke) and 1973 (Achanak) respectively, none could present the complexity of the case due to the boldness behind the whole act. As a result, this Tinu Suresh Desai (or Dharmesh Suresh Desai according to IMDB) directed film is expected to show a side to the incident which was never seen before. Its unfortunate that’s not the case here! It seems writer Vipul K Rawal and director Suresh Desai never wanted us to take the film too seriously, as the film trots along at a brisk pace and occasionally stops to send itself up. Though the film is without a doubt highly entertaining and shines in its glowing moments, its hard to ignore how the film was unintentionally hilarious, especially in the courtroom sequences, which were apparently meant to pull your emotional strings. 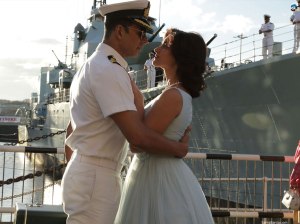 The story follows Cdr. Rustom Pavri (Akshay Kumar) returns home early from his voyage, only to find his find Cynthia (Ileana D’Cruz) is not at home and has been out from the previous day. Feeling suspicious, he checks her belongings to find she is having an affair with their common friend, Vikram Makhija (Arjan Bajwa). After confronting his wife, he goes to the Naval armory, borrows a gun, visits Vikram at his house, shoots him and surrenders himself to the police, who are shell-shocked as the rest of the nation. Vikram’s socialite sister Preeti (Esha Gupta) wants Rustom to be punished at all costs, while a Parsi press owner Erach Billimori (Kumud Mishra) plays the Parsi card to gain support for Rustom in order to increase the sale of his dying tabloid along the way. Rustom himself plays his decorated Navy credentials to show he is more of a patriot than a killer, as he pleads not guilty and refuses to a hire a lawyer. So what is Rustom? A true patriot? Or a cold-blooded murderer? Is there is a conspiracy behind all this? One of the better things about this film is that despite its 148 minute run time the proceedings manages to keeps one engaged and glued to the screen. Though the film is prone to moralizing, director Suresh Desai (who recently made his directorial debut with the horrid 1920 London) does try and acquaint viewers with the ins and outs of the trial and by using all the all the sensational material the original Nanavati case had to offer. While its good to see how the melodrama was reduced (something which Bollywood loves to get into) in order to uplift the intensity of the mystery moments, its hard to ignore how the treatment in the second half so laughably silly. When you go for a movie like this, especially after watching the trailer, you expect high octane court drama proceedings. However, director Suresh Desai is more interested in Bollywood-izing the narrative than pulling off a tight narrative (a mistake he had also repeated in 1920 London). Its understandable the titular character has to be perceived as a hero in public, mirroring what happened in the Nanavati case, but that portrayal is so sudden here that we are amused when Rustom is greeted by fans and well wishers outside the court. It’s like Salman Khan is in town.

Desai and writer Vipul Rawal spend too much energy on painting Rustom as a hero to ever delve deep into the moral and social fabric of Mumbai’s high society during the time. It is no surprise then that Rustom is always dressed in his impeccable white naval uniform even in jail with not even a speck of dust defacing it. Rawal and Desai’s hero is not a flawed man who couldn’t deal with betrayal, and that is a significant failing in the script. Moreover, the semi-cartoonish portrayals of the prosecutor and the judge don’t help matters at all. However I do give points to the makers for how painstakingly they recreated the 50s era for the film. Sure, at times the CGI is obvious and some memorabilia from the golden era are too glaringly placed for our view. Yet, it’s a job done well. The first half of the film is quite decent in setting up the plot and the further courtroom drama. Certain scenes are worth watching. Like when Rustom comes home prior to the scheduled date and his pain on exploring Cynthia’s extramarital affair. His confrontation scene with Cynthia. The scene where Rustom agrees to meet Cynthia for the first time in jail, the body language adopted by Rustom generates lots of emotions. Among, the performances, the always reliable Akshay Kumar is again a delight to watch. The film’s late pivot from questions of honor and morality to those of national pride may seem perplexing, but actually makes some sense if you see it in the context of Kumar’s career of late. A fair amount of his recent film work—Holiday, Baby, Airlift—has been concerned with patriotism in one way or another. This film could be seen as another step in Kumar’s ongoing reinvention as the honorable, supremely capable all-Indian hero. Ileana D’Cruz looks gorgeous and plays her part well. Parmeet Sethi, Pawan Malhotra, Arjan Bajwa, Sachin Khedekar and Kumud Mishra are likable. Esha Gupta tries to hard and ends up being unconvincing as the wannabe vamp. Honestly, this is not a bad film in essence, however a little more conviction in the narrative could have made it one of the best courtroom dramas of all time. On the whole, ‘Rustom’ has quite some cringe worthy moments, yet somehow with its hilarity the film manages to be entertaining, watch it purely for Akshay Kumar.