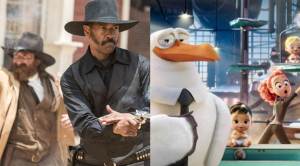 It wasn’t quite the weekend we forecasted on Thursday afternoon as Sony‘s The Magnificent Seven remake and WB‘s animated Storks both fell short of Mojo‘s lofty expectations. The weekend overall didn’t look much better as the top twelve failed to combine for $100 million for the fifth weekend in a row and the weekend itself was down 25% compared to the same weekend last year.

At the top, Sony and MGM‘s The Magnificent Seven turned in an estimated $35 million opening from 3,674 theaters, just a few thousand behind the opening of Sully two weeks ago and just ahead of Denzel Washington‘s The Equalizer from 2014, which was also directed by Antoine Fuqua. It’s tough to say exactly where this one will go from here as Westerns aren’t your typical blockbuster for the modern era and films such as The Lone Ranger and Django Unchained began their runs on Wednesday and Tuesday respectively.

One could look at 2011’s Cowboys & Aliens, which opened with $36.4 million and finished its domestic run at $100.2 million, but audience and critical opinion on that one doesn’t compare as Magnificent Seven delivered an “A-” from opening day audiences and currently holds a 63% RottenTomatoes score. A run over $100 million is inevitable, but can it reach $125-130 million when not many films that open in this range tend to climb that high unless they are animated films or comedies? The Equalizer petered out at $101.5 million, but the R-rating limited its audience reach suggesting a run anywhere from $115-125 million could be within reach.

For Storks it was a second place finish with an opening weekend estimated at $21.8 million, just over half of Hotel Transylvania‘s 2012 opening, which was then a September record. It’s also behind the $30.4 million opening for Cloudy with a Chance of Meatballs from September 2009, which carried a $100 million budget ($30 million more than Storks) and enjoyed a leggy run, finishing just shy of $125 million domestically and spawned a sequel. Whether Storks will also be the start of an animated fall franchise depends entirely on how it holds over. Initial impressions would suggest a sequel would be unlikely, but an “A-” CinemaScore (A+ from those 25 and under), which is on par with all four Hotel Transylvania and Cloudy films, suggests audiences liked it. Will they like it enough for it to see a second weekend drop similar to the first Cloudy film, which dipped only 17%? That’s the big test, not to mention its international prospects.

Beyond the week’s new wide releases, finishing in third place is Clint Eastwood‘s Sully with an estimated $13.8 million, just a 36% drop in its third weekend as the film climbs to an estimated $92.3 million domestically.

Fourth through sixth is where we find all three of last weekend’s new releases beginning with Universal‘s Bridget Jones’s Baby, which dropped 47% for an estimated $4.5 million as its domestic cume now stands at $16.4 million. Internationally is where this one is strongest as it brought in an estimated $21.9 million from 47 territories, bringing its overseas cume to $67.1 million for a worldwide total of $83.6 million. Included in those results is a second weekend at #1 in the U.K. and Ireland where it accounted for 50% of the overall market share, dropping only 19% for an estimated $8.4 million.

Open Road‘s Snowden dropped 48%, bringing in an estimated $4.1 million as its cume climbs to $15.1 million and Lionsgate‘s Blair Witch was pretty much right on average for films that scored a “D+” CinemaScore. As noted in our weekend preview, films that score a “D+” CinemaScore tend to drop around 56% in their second weekend* and with Blair Witch that average is going to get a little bump in the wrong direction as it dropped 59% for an estimated $3.95 million.

Finishing in seventh and eighth positions were Don’t Breathe and Suicide Squad, both dropping right around 33% as their domestic cumes now stand at $81.1 million and $318.1 million respectively.

It should be mentioned that Suicide Squad is now the 14th highest grossing superhero release domestically having just passed Iron Man 2. With this weekend’s estimates in place it is now just $278,758 behind Iron Man as it is likely to end its run in 13th position on the chart behind Batman v Superman: Dawn of Justice, which finished its domestic run at $330.4 million.

In limited release, Disney‘s Queen of Katwe brought in an estimated $305,000 from 52 theaters ($5,865 PTA). Directed by Mira Nair and starring Madina Nalwanga, Lupita Nyong’o and David Oyelowo, the film will expand next weekend into approximately 1,500 theaters. The film scored an “A+” CinemaScore and played to an audience of which 77% were over the age of 25.

Elsewhere, Finding Dory‘s domestic run may be coming to an end, but it isn’t done internationally. This weekend the forgetful fish brought in an estimated $5.3 million internationally as its worldwide cume now stands at $969.8 million. Dory is now the third highest grossing worldwide release of 2016 having just passed The Jungle Book ($965m) and the sixth highest grossing animated movie of all-time worldwide, having passed The Lion King ($968.5m) and only $1 million behind Despicable Me 2. Certain to help matters will be next weekend’s release in Germany and Austria and a continued expansion in Switzerland as a worldwide cume over one billion looks almost inevitable at this point.

Next weekend’s wide releases include Lionsgate and Summit‘s Deepwater Horizon in 3,000+ theaters, Fox will debut Tim Burton‘s Miss Peregrine’s Home for Peculiar Children in ~3,400 theaters and Relativity will debut the ensemble comedy Masterminds in ~2,800 theaters.