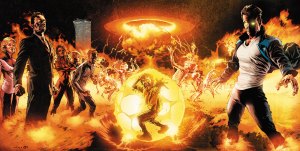 Though there looks to be no end in sight for the regurgitation of the main heroes of the DC and Marvel universes in different (yet rarely that different) directorial and narrative variations, Hollywood has been looking closely at comics outside of the two major houses for more source material. One of those is Valiant Comics, which Sony recently preemptively renewed an option with for future production.

The material in question is Harbinger, Valiant’s flagship series, and according to sources that spoke with The Wrap, Harbinger is now looking to be the first in a five-picture series that will encapsulate the Valiant Comics universe, which will likely go on to expand if everything goes right. It was previously reported that the universe would kick off with a film about Bloodshot, the super soldier who can regenerate and metamorph thanks to nanites in his blood, but it’s now looking as if that character will be introduced in the Harbinger film with plans for a solo Bloodshot movie to directly follow Harbinger. In the series, Bloodshot is tasked with hunting down the psionics at the center of Harbinger, and their battle will eventually build up to a cross-over event dubbed Harbinger Wars.

Yes, that sounds an awful lot like the build-up to Infinity Wars but let’s wait to see how this all comes together, who Sony picks to direct Arrival scribe Eric Heisserer‘s script for Harbinger, before passing judgment. Yes, the tactics and structure of the films looks to be taking most of its notes from Marvel, but that doesn’t mean the outcome will be all that similar…hopefully.

Here’s how Amazon describes the plot of Harbinger:

Outside the law. Inside your head. You’ve never met a team of super-powered teenagers quite like the Renegades. Skipping across the country in a desperate attempt to stay one step ahead of the authorities, psionically-powered teenager Peter Stanchek only has one option left – run. But he won’t have to go it alone. As the shadowy corporation known as the Harbinger Foundation draws close on all sides, Peter will have to find and recruit other unique individuals like himself… other troubled, immensely powerful youths with abilities beyond their control. Their mission? Bring the fight back to the Harbinger Foundation’s founder Toyo Harada – and dismantle his global empire brick by brick…