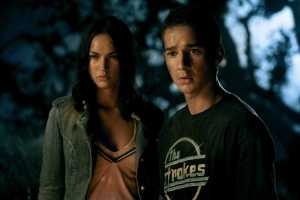 Sam Witwicky (Shia LaBeouf) was the hero of the first three Transformers movies. He was a scrappy, nerdy kid who came across the Transformers (or rather, the Transformers came across him because the coordinates of the AllSpark were imprinted on the glasses of his great-great-grandfather, Archibald Witwicky). After the third Transformers movie, Sam left the franchise, and there was with no mention of his life or whereabouts in the follow-up, Transformers: Age of Extinction, which followed new hero, Cade Yaeger (Mark Wahlberg).

So what happened to Sam Witwicky? The new Transformers movie, Transformers: The Last Knight, has the answer.

[Spoilers ahead for Transformers: The Last Knight]

In a long, drawn out scene, exposition machine Sir Edmund Burton (Anthony Hopkins) informs Oxford professor Vivian Wembley (Laura Haddock) that she is the last of the “Witwiccan” line descended from Merlin (Stanley Tucci). Burton then walks Vivian through a family tree (because audiences love family trees), explaining the rich history of the Witwicky family line to a history professor (who was somehow ignorant of her entire family’s history even though earlier we see her teaching medieval studies to a group of students) and showing photos of the Witwiccans throughout time ending with a picture of Sam Witwicky. Burton then reveals that she is the last surviving heir of Merlin, and therefore she is the only one who can use Merlin’s staff to stop the incoming attack from Cybertron.

If Vivian is the last surviving Witwicky, that means Sam Witwicky is likely dead. How he died and his life post-Transformers: Dark of the Moon is left a mystery, but it’s an ignominious end for a guy who was ostensibly the lead of the first three Transformers movie. Granted, no one expected LaBeouf to ever return, especially with Bay at the helm. That being said, since Sam’s death is glossed over and these movies lack cohesive storytelling anyway, I doubt anyone would bat an eye if Sam just magically reappeared in a future Transformers movie.