Synopsis – Chris Redfield enlists the help of Leon S. Kennedy and Rebecca Chambers to stop a death merchant, with a vengeance, from spreading a deadly virus in New York.

My Take – Despite not being a constant gamer, I have been accustomed to the Resident Evil (Biohazard in Japan) franchise & its lead characters like Leon and Chris Redfield ever since it was launched back in 1996 as a simple survival horror video game, then of course we have the critically detested Milla Jovovich starring live action versions which just ended it six film story arc last year. Even though I considered the live action series quite harmless, in general, it’s non-connectivity to the original Capcom series has come under harsh judgement (obviously along with other things), however, this third installment of the Japanese-made CG animated film series, directly ties into characters and events from the games, much to the joy of fan boys. If you’ve seen the previous two installment you can guess what fans were expecting from this film; basically, what amounts to all the cut-scenes from a RE game smashed together without the hassle of playing the actual game. Its effective and enjoyable, while managing to deliver in more ways than one that fans of the Resident Evil series will really appreciate. Like its predecessors, Resident Evil: Degeneration & Resident Evil: Damnation, it’s a stand out from the Resident Evil films by Paul W.S. Anderson by a long shot & gives us an update to one of the more forgotten characters, Rebecca Chambers, while keeping things in step with what we expect from these films. However, in case you are new to this universe, this film is sure to leave you a little unsatisfied, mainly as this one continues to the tropes set up in previous films along with an atmosphere more akin to gamers. 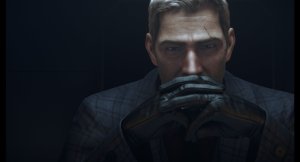 Taking place between the events of Resident Evil 6 and Resident Evil 7: Biohazard video games, the story follows the Spencer Mansion survivor (from the original Resident Evil) Chris Redfield (voiced by Kevin Dorman), who is tasked by the government with a mission to apprehend Glenn Arias (voiced by John DeMita), an International Black-Market Arms Dealer, who has been selling a new strain of the zombie virus called the A-Virus to anyone who is willing to pay. With coordinates provided by his now captured informant, Chris unknowingly leads his team into a trap, leaving Chris to fend for himself as the only survivor. In order to stop Glenn from enacting his plans, Chris seeks the help of fellow Spencer Mansion survivor Rebecca Chambers (voiced by Erin Cahill), who is now a Professor researching the T-Virus and creating a vaccine and to further understand the triggers for the A-Virus, Chris and Rebecca enlist the help of long term undead killer Leon Kennedy (voiced by Matthew Mercer), whose expertise with organism may come in handy. However, Leon is going through a personal dilemma on why he should continue to fight a never-ending war which started the moment Umbrella Corp. unleashed the Virus in the Arklay Mountains near Raccoon City in 1998. The rest of the film chronicles how the trio tries to stave off a major B.O.W. (Bio-Organic Weapon) terror attack, with the guys generally using their brawn and the chemist using her massive intellect. I know, the storyline sounds like pretty much any Resident Evil venture, eventhough we have an antagonist here who seems both intelligently twisted and creates a conflict which may be both engaging and worrying for the viewer, for multiple reasons, the film makes up for it by providing the creepy atmosphere of the original games, and the non-stop action of the newer games, herby giving the film the feel of giant B-Film, exactly how a Resident Evil film is supposed to be like.The beginning of the film was very reminiscent of the first game and they did the horror part extremely well. The rest of the film keeps your attention with the story going forward and keeping interesting events on screen, despite the film slowing down a bit in the second act. The deeper we dive into Capcom’s 20-year-old “Resident Evil” series, the more it seems as if nothing will ever get better in this virus-infested world. If it’s not one zombie-making virus running amok, it’s another; if it’s not one crazed villain with way too much money, it’s another. And no matter what the series’ heroes accomplish in one setting, it just seems to be the prologue to something much deadlier later on, such is the strangely bitter tone that permeates this film. As the video game universe started expanding, leaving Raccoon City and plaguing cities and countries around the world with viruses and zombies and horrific genetic mutations, the films, which canonically occur between main-series “RE” games, have become ever grimmer. The sense that series protagonists such as Leon S. Kennedy are endlessly struggling in a war in which they see no end is becoming suffocating, to the point that it’s changing the very core of these fan-favorite characters. Writer Makoto Fukami’s screenplay includes some inventive ideas, such as zombies programmed to attack only specified targets, and a grief-stricken villain who travels with the disembodied arm of his dead fiancée. Takanori Tsujimoto’s direction also delivers the occasional jump scare and a couple of tightly choreographed action scenes. Yes, the action sequences here are phenomenal! Lightning-paced, sometimes campy and gorgeously choreographed, the film’s multiple battles are heart-pounding examples of CGI done right. I complimented the work done in the previous film, but this is a step above even that. You just have to be willing to accept to the insanity of Leon being thrown 100ft into the air by a monster before diving and kicking said monster in the face.

This film is also a great step forward in animation quality, bordering on being just excellent. The CG animation used here is miles above what was one done in the previous film back in 2012. The film’s characters are really expressive, and every movement that needs to be done in terms of showing feelings on faces is all there and really makes the characters stand out more than usual. The other pleasing thing about the film’s CG animation is that at times you tend to forget you’re watching a fully CG animated film. A great example of this is in the beginning of the film where you only see Leon’s feet as he walks into a morgue. The animation is so detailed and well positioned that you have to check to see if you’re really watching a Resident Evil CG film. The monster designs are also incredible, especially the creepy torso infected enemy that moved around like a damn bat with wings. Kudos to the designers for knowing out to bring the horror. However, the film is not without flaws, I felt as though the story was a little rushed and not all plot lines were fully resolved (did Leon ever help that guy’s family?). Leon spends most of the film with a scowl on his face, which is a change from the snarky but optimistic man he was before he killed his boss and president of his country (along with other plot points that you’ll learn when you watch), but that’s less a complaint and more an observation. There were also some missed opportunities to pray proper homage to events from the preceding games, something that is likely to upset die-hard fans. All of the BSAA redshirts were underdeveloped which was unfortunate as they seemed legitimately interesting. Rebecca has some fantastic moments near the start but is quickly pushed to the side once Leon is introduced. Plus, the film has some strange sequences, like for example, when Rebecca wakes up tied to a chair in a holographic room designed to look like a wedding ceremony, but there’s no people in the room, just a few caskets in some of the chairs with some unseen undead folk. As soon as Arias enters, he mentions the bodies are the reanimated corpses of those who died at his wedding and he intends to relive it with Rebecca as his wife Sarah looked just like her. After some convoluted dialog about how his A-virus works and how Rebecca knows how to make the vaccine, he walks over to a smaller box, a cryogenic box, and pulls out the severed arm of his wife, wedding band still on the finger, and says to Rebecca, “Miss Chambers, meet Sarah. We’re going to be so happy together.” I forget the particulars, but something happens where she probably smacks Arias in the face, she goes on the floor again, and then he says, “On second thought, I’ll cut off your arm, and replace it with Sarah’s. Maybe that will change how you feel about me.” Yes, this sequence has no relation whatsoever or any form of build up to why this scene even takes place. I guess for a film based on a video game I should not expect much, as clearly the makers seem to think Arias is some genius grim antagonist, despite being overly campy. None of these problems really detracted from my viewing experience but I do feel as they could have all been easily resolved so it is a shame that they were present. The film has a pretty solid voice cast which consists of Kevin Dorman, Matthew Mercer, Erin Cahill, Kari Wahlgren and Fred Tatasciore, who do their jobs quite well. On the whole, ‘Resident Evil: Vendetta’ is a gorgeous, enjoyable, thrilling, yet predictable entry in this long-running fan favorite series.