Synopsis – Gru meets his long-lost charming, cheerful, and more successful twin brother Dru who wants to team up with him for one last criminal heist.

My Take – Man, the minions are back again, sigh! Hard to imagine that a few years ago this property from Universal studios would blow up to such proportions but I guess with massive expansion comes a lack of quality. When the first film of the series came around it was really good, as it tried not only to appeal to the children but also adult audiences & ended up being something special. Nowadays I can’t even remember when minions weren’t a source of irritation, and it’s hard to believe that there was a time when minions were actually a comedic side character, but even I knew somewhere, till the time Illumination Studios continue to milk money out of these characters, another sequel was always going to be due. Personally, I was a big fan of the first two Despicable Me films, mainly as it was fun to see about a villain turning to the good side & adopting three little girls while trying to save the world at the same time, however, in this third outing its quite obvious that the franchise has reached its limit as the plot is no longer engaging & the humor is fewer in between. It packs in a few story lines and follows the characters in their own separate narratives, something that I thought reduced all the characters to caricatures of their previous iterations who believed in unity and family, mainly as these characters played off each other & splitting them off into their own adventures just took away the essence of characters established before. But hey! At least the film retains its colorful entertaining animation & yes, it’s better than the Minions spinoff. The story follows Gru (voiced by Steve Carell), a former villain, who now works as an agent for the AVL (Anti-Villain League), along with his wife Lucy (voiced by Kristen Wiig), who’s also now the new adoptive mother of Gru’s three adopted daughters, Margo voiced by (voiced by Miranda Cosgrove), Edith (voiced by Dana Gaier), and Agnes (voiced by Nev Scharrel). When a new villain Balthazar Bratt (voiced by Trey Parker), a former child star obsessed with his revenge against Hollywood (for the cancellation of his show many years earlier), steals a diamond, Gru steps in and prevents him from stealing the diamond but lets him escape. 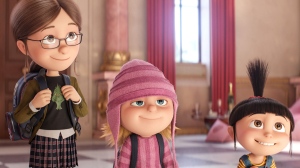 Due to the fact that the duo has been unable to capture Bratt (repeatedly), they’re fired by the new AVL director (voiced by Jenny Slate). Without a job, Gru worries about his new family, while the Minions want him to go back to villainy, he refuses, leading them to all quite (except for two). However, everything seems hopefully again when Gru discovers he has a rich twin brother named Dru (also voiced by Steve Carell) and flies out with his family to him. Excited upon meeting him, Dru proposes to Gru a return to villainy like their father, who was supposedly a great villain of his time, hesitant at first, Gru agrees when he finds out that Balthazar has managed steal the diamond successfully this time, & convinces Dru to help him carry out a heist to steal back the diamond from Balthazar. Meanwhile, Lucy is trying really hard to adjust to being a mother but loses Agnes and Edith as Agnes learns of a legend of a unicorn and becomes determined to find the mystical creature in the forest. The film shares a similar tone of the previous film with its more character driven stories rather than, well, story driven stories. As such, they brought on two new ones, Bratt, the antagonist of the film and Dru, Gru’s twin brother. Bratt is a very entertaining antagonist, as his actions are guided by his backstory. I don’t want to get too in-depth with this guy as it leads into spoiler territory, but all I have to say is that his backstory makes him a very interesting villain. As for the Minions, all but two are absent for the majority of the film. Whether you like them or not, that fact may motivate or drive you away from watching it. As the terrible ‘Minions‘ film demonstrated, too much of the adorable, pill- shaped, banana-obsessed creatures isn’t necessarily a good thing; indeed, they were probably best in smaller and supporting doses, playing bumbling sidekicks alongside Gru as he went about his villainous, then anti-villainous, ways in both the film respectively. Unfortunately, they aren’t given much, if anything, to do in this threequel, who as it turns out, are fed up of working for a good guy and decide to part ways with Gru early in the film. That means they are here no better than occasional irreverent comic distractions, much like how Scrat was in the ‘Ice Age’ films, notwithstanding a laugh-out-loud jailbreak sequence set to Pharrell Williams‘s hit ‘Freedom‘. As for the story, it’s not necessarily anything special. At many points, the film feels distracted. Alongside the plot where Gru meets and connects with his twin brother, Dru, the film has quite a few side plots surrounding the film and none of them seem to connect with the main story, which can be heartfelt and interesting to watch. Honestly, it’s kind of hard to say anything new about the plot for the film when its formula is identical to that of its predecessors. And yes, Gru is still very likable. Another key issue is the narrative and structural issues. The film sets up several different plots and subplots which give the film a lack of direction and one key story arc. These are then either wrapped up really quickly or not even concluded. At times, you feel the film drag a little, scrounging for every bit of story it could get, and there are countless occasions wherein you feel the dearth of humor badly. But it manages to hold tightly somehow owing to its calm sense of storytelling. It retains ample focus, constantly letting that smile stay on your face. Another problem here is the character development. The problem is that there isn’t any. When we left Gru last, he had married Lucy, which was one think I was hoping to see in development, but actually their marriage is never really touched upon. What is though is Lucy’s relationship with the girls, but this is one of these rushed subplots. The main emphasis is on Gru’s relationship with Dru which becomes too much as Carell stretches his high pitched German accent. 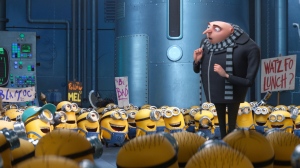 Finally, of course there is Balthazar Bratt who is probably the only treat for the parents with his nostalgic 80s style, costume and dance taking them back to the disco age of the past, but I still not quite enough to cause tears of laughter. My main complaint with the film, however, has to be Dru. As the film went on, he just felt more like a motivation to Gru rather than a main character. If you think about it, he hardly does anything until the very end of the film. The only really use that he seems to play is that he has some really cool gadgets and cars. Other than that, he’s a very over-the-top character, and not in a really good way. His voice and attitude manage to get on my nerves as he often comes off as loud with his high voice and annoying because of his over-the-top nature, which makes him that less useful. This film also chose to depict a ‘leader’ minion, Mel which was something I did not like. Other than the fact that this character has never been featured in any of the past films it just seems odd for the minions to have a leader, I always though what worked about them was how they acted as a unit. Another issue I had and I believe many other adult audiences should see this too is the missed opportunity in tackling mature issues, for example Lucy trying to be a mother to the three children or Dru and Gru both being a disappointment to their father/mother. This was an issue that should have been delved into more, this would have been the elevation that this film needed rather than being a big explosion of jokes and skits while avoiding the ‘hard topics’ and not letting it live up to its potential. Especially in a day where we have Pixar doing this successfully, (for example, Disney Animation’s Zootopia). In a day of an evolving audience base studios shouldn’t be so reluctant to discuss these issues. There are good bits though: Bratt, complete with shoulder pads, pump sneakers and 80s pop tunes of Michael Jackson, Van Halen, a-Ha and Madonna among others, is a hoot; so too the barrage of other 80s references, including Bratt’s army of weaponized figurines christened ‘Bratt Pack’. Steve Carell and Kristen Wiig lose none of their verve reprising Gru/ Dru and Lucy, and Trey Parker is a lively, dynamic addition to the ensemble voice cast – in particular as a substitute to Russell Brand, whose Dr. Nefario spends the film frozen in carbonite. Co-directors Pierre Coffin and Kyle Balda try their best-est to keep up the energy and enthusiasm from start to finish & yet even on the same level of fun as its predecessors, the film falls way short. We wish it were simply that what was once fresh has now become familiar; but oh no, the gags are nowhere near as funny nor as clever, and even the minions are starting to lose their subversive edge. Whether that is the cause or consequence of having too many things going on at the same time is anybody’s guess, but the sum of some hilarious bits, some tedious ones and a lot of underdeveloped elements in between is a sporadically amusing affair that hardly lives up to the charm of the previous two chapters. On the whole, ‘Despicable Me 3’ is unfortunately a disappointing & distracted film, which despite being mildly amusing is never really engaging.