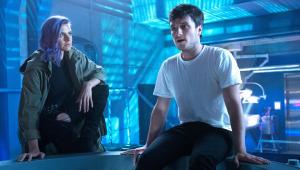 Hulu has released a trailer of sorts for their upcoming sci-fi series Future Man. Executive produced and directed by Seth Rogen and Evan Goldberg and created by Kyle Hunter and Ariel Shaffir (Sausage Party), the show follows a janitor (Josh Hutcherson) who is recruited to travel through time to save the future, but must do so without screwing up the past.

This trailer doesn’t show any footage from the show (that could be coming later today when the show as its Comic-Con panel), but it does provide a sense of humor that Rogen and company could be going for. In the trailer, Rogen insists that in order for their show to stand apart, they need to use real, functioning laser guns. Hutcherson tries to explain that using real weapons is a bad idea, and it turns out he’s right. It’s a funny little promo, and it has me interested in seeing a real trailer for the show, so hopefully we’ll get a look at that sooner rather than later.

The only way to know it’s a real laser is to look directly down the barrel. @FutureManOnHulu premieres Nov. 14. pic.twitter.com/V9970s8CGo

Future Man stars Josh Hutcherson (The Hunger Games) as “Josh Futturman,” a janitor by day/gamer by night who is recruited by mysterious visitors to travel through time in order to prevent the extinction of humanity.