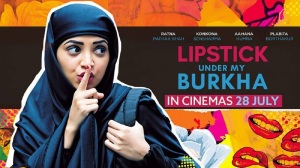 Synopsis – Set in the crowded by-lanes of small town India, Lipstick Under My Burkha chronicles the secret lives of four women in search of a little freedom. Though stifled and trapped in their worlds, these four women claim their desires through small acts of courage and stealthy rebellion.

My Take – Every year within a mix of everlasting commercial films, comes a small gem which aims to mirror certain issues of our Indian society but of course keeping in mind that an audience pays to get entertained. This film, screened cross various film festivals across the world prior to its theatrical release has been receiving huge accolades from renowned film critiques, making it a highly anticipated film for its theatrical in India and abroad. Unfortunately, this Alankrita Shrivastava directed film started hitting headlines not for its positive feedback but due to CBFC’s refusal to certify the film, hereby causing a temporary ban on its release in India. Commented upon as a film which raises the fantasy of women’s sexuality, their desires, their frustrations and their need to break the shackles of society in which they feel suffocated, the makers of the film had to plea to the appellate authority (FCAT) for a release after getting a no from CBFC. No finally released, with all the controversy around the film, I went in thinking boy there will be a lot of sex scenes, abuses, audio pornography, etc. or the film will portray everything against our so-called culture; women will suddenly go into the revolution mode, rebel against their husbands, go out and live that ‘independent’ life. But actually, there was nothing as such, so I wonder what exactly was Mr. Pahlaj Nihalani scared of. Was the CBFC scared that finally women will openly talk about their sexual desires and fantasies? Demand their right to sexuality? Or was it scared that men will agree with this alternative narration as well? Yes, director Alankrita Shrivastava has made a very unapologetic film and yes, as the media reports said, the film is bold in terms of its theme, subject, screenplay as well as its treatment, and if we compare it with the films of the west, certainly one could notice the scope of improvement, but if we take this as an Indian film, indeed, it is a first of its kind, where the film tries to depict the females and their vulnerabilities without actually defending the same.

The story follows four women, Usha Parmar (Ratna Pathak Shah), Rehana Abidi (Plabita Borthakur), Shirin Aslam (Konkona Sen Sharma) and Leela (Aahana Kumra), who live in a congested lower-middle class neighbourhood in Bhopal. Rehana is a college student who also chips in at her parents’ tailoring shop. Unknown to them, she rebels against their restrictions and the burkha forced on her. A wannabe singer and fan of Miley Cyrus, he is so submissive in front of her parents, obeys them apparently but the moment she steps out of her house, she removes the burkha and reaches college in modern outfits, just to gain the approval of her seniors. Shirin, a burqa clad door-to-door salesperson, who despite keeping it a secret from her Saudi return husband Aslam (Sushant Singh) and having three kids at home has been performing her job with great success. Unwilling to talk to her about anything, Aslam is the typical husband who roams around jobless & just comes home to have dinner & to have intercourse with Shirin. Shirin surrenders to Aslam in spite of not enjoying, besides most of the times, she ends up reaching clinics to get abortions done. Buaji aka Usha Parmar is a widow, who oversees the running of her own sweet shop and a large, crumbling residential building she appears to co-own with her nephews, has a sudden sexual awakening once she lays eyes on a much younger swimming instructor (Jagat Singh Solanki) and passes her nights reading sleazy romantic novels. Longing for his presence, Usha ends up joining swimming classes just to be close to him in the daytime! Leela the beautician, meanwhile, has been planning a new business and simultaneously having an affair with a local Muslim photographer Arshad (Vikrant Massey), unknown to her fond fiancé (Vaibhav Tatwawdi) or her widowed and financially desperate mother (Sonal Jha), she plans to run away to Delhi with him. The film is structured as a series of episodes that connect only in the climax. The approach allows Shrivastava to map out strong individual graphs for her characters, but it also eliminates the prospect of female solidarity. Unlike Parched, which came out in 2016, the four women this film fight lonely wars, each sallying forth on her own, without the benefit of a similarly sagging shoulder to cry on. The first half introduces these characters and their frustrations and how they try and deal with them. In the second half of this 117-minute running film, everything comes to a head as they are exposed one by one. The four are known to each other and share their dreams and angst. This film is not about women of any particular religious group, it is just about all women living in the shadow of tyranny. Although it is very likely that writer-director Alankrita Shrivastava consciously divided the women equally between India’s two largest religious communities to pre-empt thin-skinned fundamentalists from both sides, the composition is cleverly handled and does not for a second feel forced. The film focuses on the lives of four women who rebel against the social stereotypes quartered on them and the never ending contrast conflict between their dreams and the vested interests of the patriarchal society has been strikingly reproduced in the narrative without any reservations, unnecessary cinematic liberties or over- melodrama unlike many recent films that handled the same issue. The word “Burkha” in the title is used to represent the veil over feminine dreams and no way targeted at hurting the religious sentiments of the Muslim community in the country. This film isn’t a fight against men in particular or lipstick or burkha. It just talks about how every woman’s freedom in this story is restricted. Or how someone or the other is deciding how she would proceed with her life. The word ‘Lipstick’ is just their way of expressing their desires, fantasies, and needs; and well we don’t think that should be a problem. Unthinking political correctness often drives artists to portray marginalized persons as flawless creatures.

The women of the film, thankfully, are not. And why should they be? Women should not have to be perfect to earn the right to their rights. There is a point at which a woman is startled when a man turns on her and demands to know if she sees no use for him other than as a source of sex. Elsewhere, a man is hurt by his fiancée’s infidelity. These are sorely needed reminders that despite the overriding benefits patriarchy offers men, it also causes us to view them through a narrow lens that a society as a whole may favor but the individual male may at least occasionally not. How do so many seemingly intelligent men not see the shackles they place on themselves in a bid to shackle women? The universal truth that the sexuality of women and their desires can never go hand-in-hand with the misogynistic pre-assumptions that’s prevalent in the society has been enlightened by the film at various situations in the narrative. In one scene, we get to see a groom-to-be saying to his prospective bride that fortunately they have bought a new television set at their home so that she can be happily relaxed inside the home once they are married and in another shocker of a scene our protagonists makes a sigh that their biggest mistake is that they dream too much, an eye-opener into the plight of numerous women who are nothing but slaves inside their own homes. Despite the grim themes of female subjugation and the right to choose (your career, your spouse, the timing of a pregnancy, when you want to have sex and when you do not), director Shrivastava tells the story with a light touch, and there is as much to smile about as to weep over in this film. That said, though Usha’s tryst with potboilers is funny, at no point does the film laugh at her. If you look at the age of the four characters, we can clearly see that the combined result is the entire life of a female. So, through these characters director Shrivastava is successfully showing almost all the conflicts faced by women at all ages. While mindset of the men is the main target of criticism here, director Shrivastava also invests time in showing us the personal side of women which we very rarely get to see on screen. One such brave thing is the way they showed the sexuality of an old woman. The old architecture of the city and the administrators showing interest in demolishing them is a subtle metaphor for our pseudo progressive arguments.  The four stories are in a way various repercussion of our male dominant society as the men of the film too are an interesting lot, ranging from the out rightly horrid (the rapist husband) to the socially conditioned (the controlling father, the sweet but boring fiancé) and the confused/confusing (the lover). The women suffer pain, the source of their pain is not always a man, and they cause pain too. This is not to say that film is spotless as it comes with its own set of problems! Even though the film isn’t heavily censured, abrupt cuts were felt at few point in the narrative which could have been taken care of while on the editing table. The conclusion of the film was predictable and slightly weaker on comparison with the rest of the narrative. You could even find portions of this film to be hating on men, perhaps for a good reason. Solid performances stand as the backbone of the griping narrative and it was a delight to watch all the lead-ladies perform well on the screen. Along the years, Ratna Pathak Shah has become one of the most reliable character actors in India today. Her character Usha—hesitant yet impelled by desire—is a baring of the soul that’s as fearless as it is heart-breaking. Along with her Konkona Sen Sharma, Plabita Borthakur, and Aahana Kumra’s performances are also flawless. Vikram Massey is a delight to watch irrespective of the length of his role. Sushant Singh and Vaibhav Tatwawaadi too put up a good show. Shashank Arora sadly, is a weak plot link. On the whole, ‘Lipstick Under My Burkha’ is a bold attempt to create a thought provoking film, which despite a few hiccups, is thoroughly entertaining & engaging.