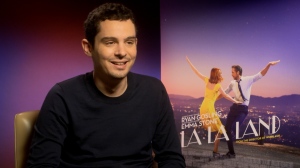 Oscar-winning La La Land director Damien Chazelle may be tackling a biopic for his next film, but he’s not entirely leaving the musical genre behind. We learned earlier this year that Chazelle was developing a music-centric TV series called The Eddy set in contemporary multicultural Paris, and now Netflix has announced that it has scooped the project up and added it to its growing slate of original series.

Scripted by Harry Potter and the Cursed Child playwright and Star Wars: Episode IX writer Jack Thorne, The Eddy is a drama series that revolves around a Paris club, its owner, the house band, and the chaotic city that surrounds them. The first season will consist of eight episodes in total, with Chazelle directing two of them and serving as executive producer alongside Thorne. The show will feature dialogue in French, English, and Arabic and will be shot in France.

Six-time Grammy-winner Glen Ballard will write the original music for the series, and Alan Poul (The Newsroom) will also serve as an executive producer. Regarding the project, Chazelle said in a statement that he’s enthused about shooting in France:

“I’ve always dreamed of shooting in Paris, so I’m doubly excited to be teaming up with Jack, Glen and Alan on this story, and thrilled that we have found a home for it at Netflix.“

There’s no word on when production might begin or when the series might debut, but Chazelle is about to start filming his La La Land follow-up First Man, which stars Ryan Gosling as Neil Armstrong and chronicles the lead-up to the mission that put Man on the moon. It’s possible Chazelle goes and directs The Eddy right after wrapping First Man, before getting too deep into post-production on that project, but the film is heading towards an October 12, 2018 release date so Chazelle doesn’t have a ton of free time on his hands.

Regardless of when it premieres, The Eddy will no doubt make an exciting addition to Netflix’s ever-growing library of original content.