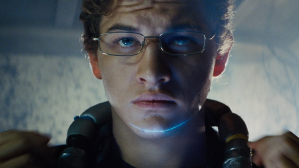 Warner Bros. has released a new poster for the upcoming Ready Player One movie, and fans flummoxed by the seemingly superhuman leg-length of Tye Sheridan’s Wade Watts in the initial poster won’t find the same complaints here. Instead, this time around the poster is a clear Drew Struzan-inspired piece of art meant to evoke the movie posters of the 1980s, when hand-drawn poster art used to be the norm. In the process, this poster also offers some new looks at characters played by Simon Pegg and Mark Rylance, as well as the colorful avatars of our heroes (and villains) used in the OASIS.

If you’re unfamiliar with Ernie Cline’s source material every word of what I just said probably sounds like nonsense. The story takes place in a dystopian future where humanity spends most of its time in the VR world of OASIS—which is basically a new internet, but in Virtual Reality. When the creator of OASIS (Rylance) died, he challenged the world to an Easter Egg hunt inside the OASIS, with the winner taking a fortune and control of the OASIS in perpetuity. Sheridan plays a teenager who stumbles upon the first Easter Egg, leading to an intense race against time (and corporatism) to find the remaining clues.

The Struzan stylings of this poster are a swell fit for director Steven Spielberg, who had plenty posters of his own drawn by Struzan himself. Indeed one of the big questions with Ready Player One is how heavy Spielberg will lean into the 80s references that abound in the book, which would mean he’d be revisiting a lot of films he had a hand in bringing to the screen.

We’re getting closer to seeing the finished film—a new Steven Spielberg movie, folks!—but for now take a look at the new Ready Player One poster below. The film also stars Olivia Cooke, Ben Mendelsohn, Lena Waithe, and T.J. Miller and opens in theaters on March 29th.

Here’s the official synopsis for Ready Player One:

The film is set in 2045, with the world on the brink of chaos and collapse. But the people have found salvation in the OASIS, an expansive virtual reality universe created by the brilliant and eccentric James Halliday (Mark Rylance). When Halliday dies, he leaves his immense fortune to the first person to find a digital Easter egg he has hidden somewhere in the OASIS, sparking a contest that grips the entire world. When an unlikely young hero named Wade Watts (Tye Sheridan) decides to join the contest, he is hurled into a breakneck, reality-bending treasure hunt through a fantastical universe of mystery, discovery and danger.