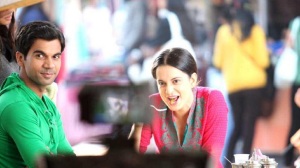 Talented actors Kangana Ranaut and Rajkummar Rao, who first joined hands for Vikas Bahl‘s Queen, are teaming up again for an upcoming psychological thriller to be bankrolled by R Singh and Ekta Kapoor. The project will be helmed by Prakash Kovelamudi, who will debut in Hindi cinema with this film. Prakash is the son of veteran Tollywood filmmaker K Raghavendra Rao.

“It’s a fast-paced thriller revolving around the two protagonists. Set in London and Mumbai, it is expected to roll in March. Raj recently heard the script and immediately came on board. Both Kangana and he are looking forward to working with each other once again,” says a source.

The source informs that the film has been written by director Prakash Kovelamudi‘s wife who boasts of a great experience in screenwriting.

“The film has been written by Prakash’s wife, writer Kanika Dhillon who had earlier written the screenplay and dialogue for the Shah Rukh Khan-starrer Ra.One, Abhishek Kapoor’s Kedarnath and her husband’s Anushka Shetty-starrer Tamil-Telugu bilingual, Size Zero.”

One response to “Kangana Ranaut and Rajkummar Rao To Pair Up For A Psychological Thriller!!!”