Synopsis – Lara Croft, the fiercely independent daughter of a missing adventurer, must push herself beyond her limits when she finds herself on the island where her father disappeared.

My Take – It’s been a while since I held a video game console in my hands, but hey that doesn’t mean I won’t be excited for the next video game adaption to come to screen. While we all know that video game adaptations have had an exceptionally long track record of being really bad, ranging from the horrid Super Mario Bros, Street Fighter and Hit man to the watchable yet hated Resident Evil and Silent Hill films to recent big budget flops like Warcraft and Assassin’s Creed. If you notice closely, they all seem to follow a pattern, which starts from the casting of a well known actor/actress, followed by a decent well made trailer that impresses fans & non fans alike, yet eventually crashing and burning in the box office, thanks to their not so glowing reviews from the critics and fans alike, with the latter proving that even the presence of an actor like Michael Fassbender couldn’t save a film from diminishing returns. Coincidently this time around his wife, Alicia Vikander, is taking on the mantle of one of the most popular female protagonist’s in the gaming world, Lara Croft. Though, Angelina Jolie played Croft in two films that came out in 2001 and 2003, though financially successful, the films are mostly known for being terrible, patently silly and campy without any sense of self-awareness. To my surprise, this 2018 reboot surprisingly remains grounded and contributes to the story with a great grasp onto the source material. Yes, it still pertains many of the same issues that previous video game adaptations have, but the film does deliver a fun story that can stand tall on its own. Sure, this isn’t an adaption that is going to be remembered as great film, but without a doubt, will always be counted as one of the rare enjoyable video game to live action adaptations to hit the screens. 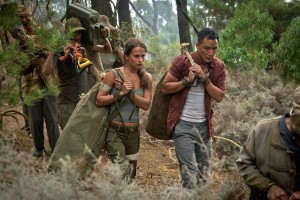 The story follows Lara Croft (Alicia Vikander), an orphan seeking to make her way in the world after the mysterious disappearance of her father, Lord Richard Croft (Dominic West), a businessman and an adventurer, seven years ago. Working as a bike messenger, Lara is not willing to declare him dead, not yet, and thus refuses to sign the paperwork that would let her collect her inheritance, despite constant pressure from Ana Miller (Kristin Scott Thomas), her former guardian and the COO to Croft Corp. However in order to get over her money troubles, she agrees and on the verge of the signing, her father’s lawyer, Mr. Yaffe (Derek Jacobi) hands over her a puzzle which leads her to the family crypt, where she discovers a series of clues that lead to her father’s last great quest: the tomb of Himiko, a fabled Japanese Queen of Death whose remains lie on a mysterious island called Yamatai. Driven to finish his quest, Lara heads to the island, where she finds booby traps, deadly puzzles, and a rival expedition headed by the psychopathic Matthias Vogel (Walton Goggins), who for the mysterious group known as the Order of Trinity. Together with Lu Ren (Daniel Wu), a rebellious boat captain, Lara finds herself in the unenviable position of trying to get to Himiko’s tomb first as the fate of the world hangs in balance. Those who’ve been waiting for a video game-adapted film with actual substance need look no further, as director Norwegian Roar Uthaug and writers Geneva Robertson-Dworet, Alastair Siddons and Evan Daughtery take on a near-impossible task, which many filmmakers would have balked at, and pull off a reimagining with surprisingly fresh and stylish results. The film’s story by rockets off in great style with a fox and hounds type of bike chase around the City of London which is brilliantly done and sets up Croft’s character up with the minimum of tedious back story, though, the Angelina Jolie led films were fun and had a sort of style to it, this reboot is grounded when it comes to action and we see Lara Croft in her earlier years, as she is vulnerable, fearless, and she sure can take hits from bad guys to falling in river rapids and hitting tree branches. This film is primarily about Lara’s first ‘adventure’ and the origin of how she becomes the Lara Croft everyone knows her as. In order to do that here, director Roar Uthaug, takes a fresh approach to the problem of audience engagement, by dialing up the emotional core that’s always been at the heart of the franchise — the relationship between Lara and her long-lost father — while also finding ways to deviate from the story told in the game. Director Roar Uthaug, whose 2015 action-drama The Wave kept its characters afloat amid thrilling set-pieces involving an 85ft tsunami, this film similarly quests for authenticity: practical effects, rough ‘n’ ready action sequences, and, courtesy of Vikander’s soulful eyes, some emotional weight to go with the extra four kilos of muscle she piled on for the part. No thigh holsters strapped over hot pants here – just cargo pants and a biker jacket, and though she quickly sheds the latter to reveal what looks like a spray-on vest, director Uthaug’s vision stays focused on her athleticism. We constantly feel the peril Croft is in and that is credited to Roar Uthaug‘s slick direction that there is an urgent pace throughout the film and director Uthaug manages to captures what makes the games fun in the first place. There is also a good grasp on the lore from my limited understanding of the game. 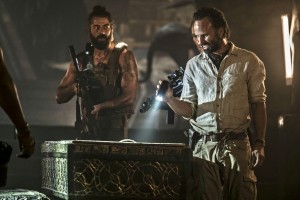 The story focuses on the intimate moments and mystery elements of Croft’s origin which I felt lacked from Jolie‘s films, something which made Vikander‘s Croft a really layered and interesting character. They even made the character most effective weapon in the film to be her brains. The film’s second act is when the quality starts to come in, managing to tie the elements set up in the first part and give it a video game like twist. Lara’s fight in the wild against Trinity’s tyranny is a semi-suspenseful adventure that you are looking for. Integrating action brawn with puzzle-solving brains, the trials on the island are certainly the most exciting part of the film, (perhaps in homage to Indiana Jones films to which it seems inspired much from). It works quite well for the start of the series, and one I look forward to seeing grow if they do it right. In fact, this may just be what the genre needs, simple, fun and engaging. It does not go over its head trying to shove in lore as many other video game films do but rather strikes a balance between fan services and relate ability for newcomers. There is also fair amount of nifty camera work and lighting effects, especially during the night time scenes, the ship wreck scene is standout here, with the lightning taking that scene from nothing more than a standard escape scene to a fantastic suspense filled race for survival. Junkie XL has once again created a solid score, which he seems to do every time he takes on a big budget project such as this. A score which helps make the film feel even faster paced that it already is, which simply works so well. As an action film, the film is really jammed pack with video game absurdist action sequences that make the film such a fun ride. From dangling on a crashed plane on top of a waterfall, to parachuting into the canopy of a forest every action scene seemed genuinely high risk and painful. In a sense the film is not afraid to get down and dirty adding grit and realism to the over the top action. The payoff for all of Vikander‘s arduous training is right up there on the screen/clearly evident. Her fights aren’t needless fancy flipping and such, but rather rough, dirty and look like they take a lot out of her (not only physically, but mentally as well, like when she’s forced to take a life for the first time). She’s not superhuman, but rather just the best she can be and it’s not just fighting she’s skilled at, but also archery, stealth, and deadly puzzle-solving. However despite everything the film is bogged down by a number of problems, for example the film has some of the most noticeable CGI this year has to offer and the dialogue can be slightly generic and cringe-worthy at times, but I’d be lying if I didn’t call this a fun adventure flick with some terrific and devoted performances all around. What holds this film together is Alicia Vikander‘s performance, as she embodies what Lara Croft in the reboot video game series is, i.e. being vulnerable, young, and acting out of necessity. If you were expecting another Jolie-like Lara, you will be disappointed as Vikander‘s take on the character is entirely her own, and that’s a great thing. This is definitely a pivot for the actress, who won an Academy Award in 2016 for her performance in The Danish Girl, and if her petite frame raised questions about her ability to perform credible stunts prior to the film’s release, she has more than dispelled them. In fact, the physical and emotional toll of being Lara Croft is more evident in this film than it ever was before. As the main antagonist, Walton Goggins is also very good in this film. While the supporting character played by Daniel Wu had a much smaller role there was a believable chemistry that seemed to be brewing between him and Vikander and it will be interesting to see how they take that character in future installments of the franchise. Dominic West is superb as always, benefiting the audience’s relateability to Lara Croft and her hero’s journey. In smaller roles, Kristin Scott Thomas, Derek Jacobi and Nick Frost are likable. On the whole, ‘Tomb Raider’ is one of better video game film adaptations to come to screen, all thanks to its fast paced action, simple premise and a stunning lead in Alicia Vikander.