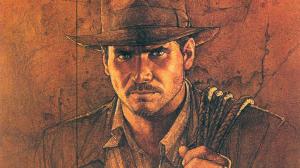 While Steven Spielberg called an audible in 2017 and put together, shot, and released The Post in what has to be some kind of record time, with Ready Player One hitting theaters this month the filmmaker is now turning to what’s next. It was announced in March 2016 that Spielberg and Harrison Ford were reuniting for Indiana Jones 5, which at the time had a July 2019 release date targeted. Obviously squeezing in The Post put a bit of a wrench into those plans as the date has now been pushed back to July 10, 2020, but Spielberg is now committed to making the sequel his next project and he recently revealed the Indiana Jones 5 filming date and location.

Speaking at the Rakuten TV Empire Awards where he received the Legend of Our Lifetime award, Spielberg revealed that he’ll be shooting Indiana Jones 5 next year in the UK:

“It’s always worth the trip when I get to work with this deep bench of talent coming out of the UK. The actors, and the crew, the chippies, the sparks, the drivers — everybody who has helped me make my movies here, and will continue helping me make my movies here when I come back in April 2019 to make the fifth Indiana Jones movie right here.”

While Indiana Jones and the Kingdom of the Crystal Skull was shot entirely in the U.S., Spielberg shot parts of The Last Crusade in the UK, and most recently shot soundstage work on Ready Player One there. This being a Lucasfilm movie and all, it’s possible Indiana Jones 5 is taking over the soundstages at Pinewood that will no doubt be used for Star Wars: Episode IX this year since the studio hasn’t set a new Star Wars movie to go into production after Episode IX just yet.

We still don’t know much of anything about the plot, but we do know this is the first Indy movie for which George Lucas did not come up with the story, as David Koepp has been on screenwriting duties crafting a new story.

Spielberg is also juggling a few other projects at the moment, but they’ll come after Indiana Jones 5. There’s the long-developing The Kidnapping of Edgardo Mortara which was supposed to shoot after Ready Player One, but was pushed when The Post arose and because Spielberg had trouble casting the child at the center of the movie. That film may or may not be dead now, as Spielberg recently held a secret table read for a Leonard Bernstein biopic. He’s also put out a casting call for a West Side Story remake to see if he can fill the roles for what would be his first musical.

Spielberg will spend the rest of 2018 prepping both Indiana Jones 5 and whatever becomes his next film after that, and he’ll shoot them back to back in 2019 and 2020, as he has done many times before.