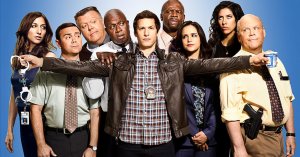 In a completely bone-headed move, FOX has decided to cancel Brooklyn Nine-Nine and The Mick. This news comes on the heels of the announcement that FOX has also cancelled The Last Man on Earth, so it’s a day of bloodshed in the comedy department at the network. While I can understand the decision to axe The Last Man on Earth, which had run out of gas a bit, the cancellation of Brooklyn Nine-Nine is less understandable. The show’s ratings haven’t been considerably better (or worse) than its previous season, but critically it’s booming. This is one of the best ensembles on TV right now, full-stop, and trying to replicate that kind of comedic chemistry and timing from scratch will be an incredibly difficult task.

The Andy Samberg-fronted sitcom launched in 2013 as a comedic spin on the cop procedural format from Parks and Recreation executive producers Dan Goor and Michael Schur. But just as with Schur’s Parks and Rec and The Office, Brooklyn Nine-Nine quickly morphed into much more than a star vehicle, and the ensemble found its groove incredibly quickly. From then on, the show consistently showcased a compassionate and ridiculously funny group of individuals, with storytelling that wasn’t afraid to take huge leaps—again, just as with Parks and Rec and The Office.

Heck, Andre Braugher’s delightfully dry performance alone is reason enough to keep Brooklyn Nine-Nine on the air, not to mention the growing character dynamics. From a creative standpoint, canceling Brooklyn Nine-Nine is a huge mistake, and I’ll be curious to see if any other network is interested in picking this show up.

As for The Mick, I’ll admit I never watched the series but heard good things. Its cancellation after two seasons, as opposed to Brooklyn Nine-Nine’s five, isn’t as much of a shock.

Nine-Nine showrunner Dan Goor has said the Season 5 finale, which revolves around Jake and Amy’s wedding, is not intended to be a series finale. But he has said in the event it is the last episode, fans will be satisfied.

Not cool, FOX. Not cool.