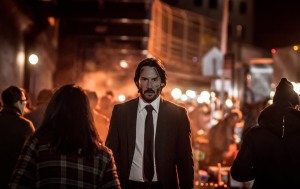 The John Wick 3 cast is coming together as production on the action-packed sequel has begun. Keanu Reeves returns in the title role, obviously, but Lionsgate has revealed new information on all the new cast members. First and foremost there’s Oscar winner Halle Berry as the film’s female lead, Sofia, a character who is reportedly not a villain. Then there’s Anjelica Huston as The Director, Asia Kate Dillon (Billions) as The Adjudicator of the High Table, Jason Mantzoukas (The League) as The Tick Tock Man, and Agents of S.H.I.E.L.D alum Mark Dacascos as an assassin named Zero. The film has also added martial arts star Tiger Hu Chen and The Raid actors Yayan Ruhian and Cecep Arif Rahman as characters who will square off against Reeves’ lethal avenger.

That’s quite a few new faces, but Laurence Fishburne, Ian McShane, and Lance Reddick will be reprising their roles from the previous films, so there will certainly be connective tissue. The story of John Wick: Chapter 3 picks up directly after the events of John Wick: Chapter 2, as Reeves’ character has a very short time window in which to escape New York City after killing a member of the assassin’s guild the High Table.

These new additions are thrilling, particularly Dillon who has been doing outstanding work on this most recent season of Billions. And Berry and Huston add a serious pedigree to the ensemble here.

Chad Stahelski is returning to direct this third and possibly final installment of the franchise, which is due to hit theaters on May 17, 2019.