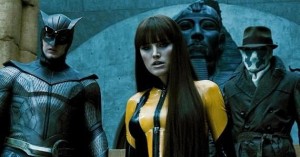 The cast of HBO’s “Watchmen” pilot continues to grow.

Yahya Abdul-Mateen II and Sara Vickers have both joined the project, which hails from Damon Lindelof. As with previous “Watchmen” casting announcements, HBO provided no details about the characters the two will play.

This project marks the second superhero property in which Abdul-Mateen will appear. He is also set to appear as Black Manta in the upcoming “Aquaman” film opposite Jason Momoa. The actor is also known for his appearance as the disco-loving gangster Cadillac in the Netflix series “The Get Down” and was recently featured in “The Handmaid’s Tale.” On the film side, he played Sgt. Ellerbee in the recent “Baywatch” movie and had a role in the Oscar-nominated film “The Greatest Showman.”

Vickers is best known for her role as Joan Thursday in ITV’s Inspector Morse prequel, “Endeavour.” Her other TV credits include “The Alienist,” “The Crown,” “Man Down,” “Bert & Dickie,” and “Privates.” She has also been featured in the films “Sunshine on Leith,” “Breaking,” “Thought for a Day,” and “Connect.”

Lindelof previously posted a letter to fans in which he laid out his vision for the series, which he said will not be a re-telling of the story from the original graphic novel, but rather a new story in the same world with new characters set in the present day. The original story followed a group of crime fighters investigating the murder of one of their own. In the process, those characters — including Doctor Manhattan, Nite Owl, Silk Spectre, and Rorschach — uncover a conspiracy with enormous implications. It is unclear which, if any, of those characters will appear in Lindelof’s version.

“Some of the characters will be unknown,” Lindelof wrote. “New faces. New masks to cover them. We also intend to revisit the past century of Costumed Adventuring through a surprising yet familiar set of eyes…and it is here we will be taking our greatest risks.”