Synopsis – As Scott Lang balances being both a Super Hero and a father, Hope van Dyne and Dr. Hank Pym present an urgent new mission that finds the Ant-Man fighting alongside The Wasp to uncover secrets from their past.

My Take – This has been an excellent year for Marvel Studios! Beginning with the massive success of Black Panther, and following it up with the worldwide phenomenon known as Avengers: Infinity War, which despite being released two months ago, has still people gasping over the film’s unexpected and somber ending. While everyone eagerly await the next Marvel Studios film to drop any type of clues as to what will happen next when the fourth Avengers film arrives next summer, for the time being we are left to entertain ourselves with the much more lighthearted sequel to director Peyton Reed‘s Ant-Man.

Released back in 2015, the Peyton Reed directed film, had arrived with it’s own set of controversies following the rift between Marvel and the film’s original director, Edgar Wright, who was rumored to have a sillier, more standalone film in mind, other than gluing his film to MCU plot lines, sure, the final product wasn’t the best work, but with Paul Rudd as the lead, the film was enjoyable enough especially considering how it stayed away from the save-the-world insanity of many other Marvel Studios films. In my opinion this sequel is ions better than its predecessor, due to the furthering of characters, and hereby giving itself a solid place in this franchise as a whole. This sequel is a delightful crowd pleaser, brimming with charm, laughs, and fast-paced, stylish action, and a definite change of pace which was necessary following the harrowing events that transpired in Avengers: Infinity War. While it doesn’t stray too far from the basic formula, but it does allow itself to be far more creative, ridiculous, and fun than the first film. 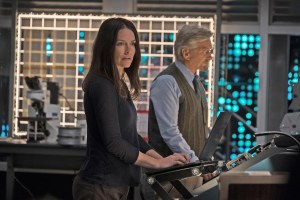 Set before the events of Avengers: Infinity War, the story follows Scott Lang (Paul Rudd), who after siding with Captain America in the events of Civil War, gave up his superhero alter ego, Ant Man, and agreed to a plea deal to stay out of jail. Now in the final days of his house arrest, Scott is all excited to re-embrace his former life as co-parent to his daughter Cassie (Abby Ryder Fortson), and become more actively involved with in his security business which he set up with this ex con pals, Luis (Michael Pena), Kurt (David Dastmalchian) and Dave (Tip “T.I.” Harris). However, fate intervenes when a strange dream about Janet van Dyne (Michelle Pfeiffer), causes Scott to contact the on run, Hope van Dyne (Evangeline Lilly) and her father Hank Pym (Michael Douglas), who come crashing back into his life with an urgent mission to save Hope’s mother and Hank’s wife, from the Quantum Realm, an alternate dimension Janet vanished into decades ago and Scott returned from in the events of the first film.

Things further complicate with the arrival Sonny Burch (Walton Goggins), a black market tech dealer, and a dangerous new adversary named Eva aka The Ghost (Hannah John-Kamen), who seems to derive her weird powers from the Quantum Realm too. With the clock ticking, the three must contend from all the help they can get including Pym’s old lab partner turned enemy, Bill Foster (Laurence Fishburne). Needless to say, Scott must suit up as Ant-Man and join Hope’s Wasp to succeed, and stay ahead of F.B.I. Agent Woo (Randall Park) and his team all the time.

Here, the stakes feel low and I personally felt that it was more of a good thing. Considering the dark direction the last film took, this 20th feature from Marvel Studios lights up the franchise once again with the characters and their charm, humor, and a simple plot, something which the power house studio built upon on. The grounded story with an everyman kind of a lead, makes this superhero story seem more relatable on a human scale. As the characters are not worried about saving the world, their struggles and battles are more personal. As they do that, we are just meant to laugh and enjoy their slick action, and impressive graphics.

With the use of scientific jargon in the film, returning director Peyton Reed and his team of five screenwriters (including Rudd himself) also had to throw in some exposition to keep us following. The first half has a lot of this and most viewers will see through the superficiality of it all being just a build-up for what comes later. It’s in the second half, where the film stops holding back and unleashes everything we have been waiting for and more. The film is at its best when it is ridiculous, funny, and over-the-top, while this one may not be the most laugh-out-loud MCU film, it clearly sells the comedy well. The film’s jokes are so carefully written, that each act is funnier than the first, just because each little joke builds on the last, with many paying off for the third time later in the film. My favorite example of shaking things up is Scott Lang’s latest suit, which is merely a prototype and doesn’t have the best regulator, meaning Lang cannot control in some scenes how big or small he is, which ranges from the size of an ant to the 65-foot record he set in Germany.

It serves for some of the films more hilarious moments while the film might be a comedy at heart, it is still very much an action film. Here, director Peyton Reed manages to make small powerful scenes in some outstanding uses of the shrinking powers Ant-Man possess. There are car chases, fight sequences, and even a few death-defying stunts. The way they use the shrinking technology in certain instances here is absolutely brilliant. The visual gags are what bring these films to another level and Ant-Man and the Wasp is no exception to that notion. Altogether, it feels like this sequel really embraces the potential that the original laid out. Best of all the film feels like it steps outside the mold that most Marvel films feel like they’re vacuum sealed into these days.

Sure, it’s an action comedy like so many of them, but it’s just a ton of fun and doesn’t feel quite like an all-out superhero film at heart. Which wouldn’t have been possible of the characters were not as likeable as always. By focusing on its best characters, this sequel makes room for convincing relationships and character-building; it makes viewers give a feel about its cast and forgive the film’s few imperfections. For example, despite not seeing Scott’s extended family that includes Maggie (Judy Greer), Lang’s ex-wife and Police officer Jim Paxton (Bobby Cannavale), husband to Maggie, that much in this entry, the small scenes where Scott bonds with his daughter Cassie are quite heartwarming. It’s not often we see a superhero who is also a dedicated parent and its welcoming to witness such a genuine love between these characters, even if it is minimal.

These sequences are perfectly placed to let us breathe as an audience and connect to the film’s highly personal chaos. It’s no secret that Marvel has seriously been upping their game with their female counterparts. They’ve come a long way from just having Black Widow (Scarlett Johansson) in their ranks and have some truly striking ladies from Valkyrie (from Thor: Ragnarok) to Okoye and Shuri (Both Black Panther). Now Evangeline Lilly‘s version of Wasp gets to join them. In fact, she’s so awesome here that it feels a lot more like Ant-Man is her sidekick. While we get to see some pretty awesome uses of shrinking powers in the first film, this film really ups the ante, as the Wasp manages to take groups of baddies apart in absolutely astounding displays of grace and brutality.

Even the gender swiped version of The Ghost is a rather interesting choice as an adversary as she is not bent on conquest, revenge, mass destruction, or accumulating power and wealth. While it may seem odd to have a more down to earth and relatable villain in a Marvel film, it does continue a recent trend of showing of adversaries who are complex, harder to define, and sympathetic much like Sebastian Stan‘s Winter Soldier. Yes, there are quite a few plot holes and some of the humor goes a little too far, especially in a few of the dramatic moments, but this film is just a great ride to take at the films, plain and simple. However, like previous Marvel films, this one too relies on people having seen the other films of the MCU. It makes a number of references to Captain America: Civil War and Scott Lang’s involvement in the events of that film. Of course, it also helps to have seen the first ‘Ant-Man’ film too so you know who these characters are and what in the heck that Quantum Realm is and of course, the post credits tie in into Avengers: Infinity War, so stick around.

It’s hard to imagine anyone more suited to play Scott Lang than Paul Rudd. He’s hilarious and genuine, makes a lot of mistakes, but you don’t really blame him because he’s such a lovable goofball. Evangeline Lilly too is pitch perfect. Hope has been preparing for her moment to shine and Lilly makes sure she does. Michael Douglas brings a certain dignity to Hank and Michelle Pfeiffer makes a wonderful addition to the cast. Michael Peña is once again hilarious, especially during his narration of his exaggerated stories. His sidekicks TI and David Dastmalchian are hilarious too. Hannah John-Kamen is effective as the main antagonist, and Walton Goggins also makes his mark. In supporting roles, Laurence Fishburne, Judy Greer, Abby Ryder Fortson, Bobby Cannavale and Randall Park are also good. On the whole, ‘Ant Man and The Wasp‘ is another worthy addition to the MCU, that’s not just more mature, and emotionally fueled that its predecessor, but also double the fun.