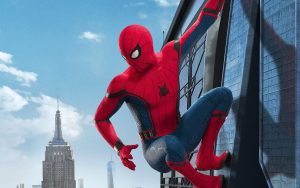 It looks like Tom Holland’s Peter Parker will getting another new look in next year’s Spider-Man: Far From Home, with a set photo arriving online, which show the web-slinger atop a Ferris wheel in what appears to be an all-black costume. Take a look here:

It’s said that this isn’t the symbiote suit (which isn’t surprising given that Sony is working on its own Venom movie), with speculation suggesting that it may well be the Stealth Suit from the comic books, which essentially makes Spidey invisible. That would certainly make sense, as Spider-Man touring Europe at the same time as Peter Parker and his classmates would certainly arouse suspicion!