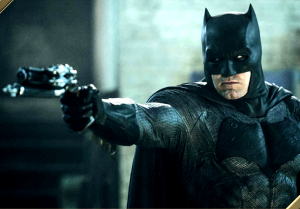 Earlier this week it was announced that Mary Elizabeth Winstead (Fargo) and Jurnee Smollett-Bell (Underground) have been cast as Huntress and Black Canary in the upcoming DCEU movie Birds of Prey.

As revealed in the official announcement, the movie will see Huntress and Black Canary teaming with Margot Robbie’s Harley Quinn to take on a crime lord – thought to be Black Mask – in “a Gotham that isn’t protected by Batman”.

Now, given that Batman exists and is active in the DCEU (whether that’s Ben Affleck’s Batman or not is another story), it would certainly seem strange if The Dark Knight doesn’t pop up to lend a hand against the villain.

However, according to an unconfirmed rumor on Twitter, Birds of Prey will address Batman’s absence, although it may not give us any concrete answers:

From what I understand there is a line in the script that someone mention how no one has seen Batman in Gotham for two years and that's about it. He's probably with The League or maybe they'll answer it in his solo movie somehow 🤷‍♂️ https://t.co/1fD4dwT3w8

While it’s possible this could be sewing the seeds for a story point in The Batman or a future DCEU movie, this could also be little more than a throwaway line to sweep aside the whole Batman issue for this particular movie and won’t actually lead anywhere.

On a side note though – if it is true that Batman has been absent from Gotham for two years, one would have to imagine the city’s costumed crazies will be running absolutely wild!