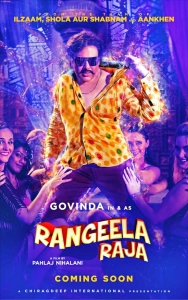 It will be the mighty Bachchan versus the flighty Govinda this Diwali. Yes, defying all advice and throwing all caution to the winds, producer Pahlaj Nihalani has decided to release his Govinda comeback vehicle Rangeela Raja alongside Yash Raj’s Bachchan-Aamir Khan biggie The Thugs Of Hindostan.

Nihalani says it is a market-based decision. “See, it’s simple. When a very big film is being released all other releases scamper out. But the fact is, there is a room for another entertainer to supplement a big film. Those who can’t see Thugs Of Hindostan would have a choice now to watch Rangeela Raja instead of wondering what to do and where to go.”

Compounding his logic Nihalani says, “If you remember, David Dhawan’s Bade Miyan Chote Miyan featuring Bachchan Saab and Govinda where they both did well. Now ‘Bade Miyan’ and ‘Chote Miyan’ would be seen together this Diwali. I hope they both emerge winners.”