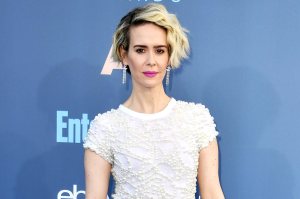 Emmy winner Sarah Paulson is set to star in the Lionsgate thriller Run, which hails from the creative team behind the acclaimed indie movie Searching, Collider has exclusively learned.

The story follows a teenage girl — raised in total isolation by her mother (Paulson) — whose life begins to unravel as she discovers her mother is hiding a sinister secret. Paulson is a strong fit for the role, having shown a dark side of herself as an actress on various seasons of American Horror Story, and I can’t wait to see which up-and-coming actress lands the plum part of her daughter. This is largely a two-hander, and whoever is cast will have to go toe-to-toe with Paulson, which is no easy feat.

Aneesh Chaganty is directing from a script he co-wrote with Sev Ohanian, who will also produce alongside Natalie Qasabian. Production will start on Halloween and run through mid-December. The trio have been poised to make the jump to studio movies ever since Searching won the Sloan Prize at Sundance earlier this year. Released in theaters in August, the twist-filled thriller starring John Cho and Collider’s Up-and-Comer of the Month Michelle La has grossed $65 million worldwide on a budget of less than $5 million.

Paulson recently starred in the box office hit Ocean’s 8as well as a trio of acclaimed dramas — Steven Spielberg‘s The Post, Todd Haynes‘ Carol and Steve McQueen‘s 12 Years a Slave. She has recently wrapped several high-profile projects, including M. Night Shyamalan‘s Glass (due Jan. 18), WB/Amazon’s adaptation of The Goldfinch starring Ansel Elgort, and the Sandra Bullock thriller Bird Box (due to hit Netflix on Dec. 21) — and she can currently be seen on the eighth installment of Ryan Murphy‘s FX anthology series American Horror Story. In fact, it was Murphy who cast Paulson as Marcia Clark in The People v. O.J. Simpson: American Crime Story, for which she won an Emmy, a Golden Globe and a SAG Award, among others.

Additionally, Paulson is set to star in the Netflix series Ratched, based on the character of Nurse Ratched from One Flew Over the Cuckoo’s Nest. She’s represented by CAA, which also reps Chaganty and Ohanian. The Searching trio is also repped by attorney Arine Harapeti.