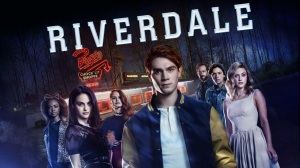 Riverdale is taking a trip to the past with its upcoming Season 3 flashback episode, which will see the show’s main cast taking on new roles — as their parents. Taking place in the early 90s, viewers will get to see Alice as young South Side Serpent, but the episode will also connect to the larger story. In an interview with EW, executive producer Roberto Aguirre-Sacasa said: “One of the things that the kids discover pretty early on is that the murder victims in the present were playing a game called Gryphons & Gargoyles, which is of course the Riverdale version of Dungeons & Dragons. And what our kids in the present discover is that their parents, when they were in high school, were also playing this game and there was a similar murder that happened in the past.”

The biggest transformation, though, is probably the aforementioned Alice. “She’s not just this uptight, precocious, looks-down-upon-everyone teen — like she was a Serpent. So that gives her young personality a lot,” said Lili Reinhart. Mädchen Amick also mentioned that she’s “hoping to learn more about the moment that Alice chose to leave the Serpents behind.”

As for the mystery itself, ““There’s a secret that they are harboring,” Skeet Ulrich told the publication. Luke Perry then added, “There is something in the past for Fred and for a few of our parental characters that we’re going to get to, and I don’t necessarily want anybody to know about it. Everybody’s got their secrets, right?”

Check out the new images below; Riverdale airs Wednesday nights on The CW, and the flashback episode will air November 7th.