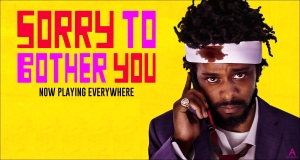 Synopsis – In an alternate present-day version of Oakland, telemarketer Cassius Green discovers a magical key to professional success, propelling him into a universe of greed.

My Take – Between the mix of blockbusters, award baits and small time Indies, there are certain films that grapple hard enough to find themselves a section of the audience. What separates this films from the rest of the lot is how they worm their way inside your mind and break it wide open, reminding you of the awesome power of art that holds up a fun house mirror to society to reveal existential truths. Yes, this is that kind of a film. Marking the directorial debut of rapper Boots Riley (best known as front man of political hip-hop group The Coup), who comes out here swinging in this original, funny, and somewhat straightforward satire on race, corporate culture, economic factions, social division, and politics, while also making a nice companion piece to last year’s critical darling, Get Out.

Seriously, this live-wire comedy veers in so many directions that you would never see coming, and I truly mean this in the best way possible. Though the film gets mess at times, especially in the final act, it manages to remain compelling and taps into a glorious cinematic history, by joining the ranks of films like Dr. Strangelove, Fight Club, and Being John Malkovich as satirical touchstones that define an era of American history. Sure, director Riley‘s ambitious film-making has a variety of possible influences (especially Spike Lee) yet it feels wholly original and genuinely, hilariously funny and socially relevant despite being so unconventional from beginning to end. 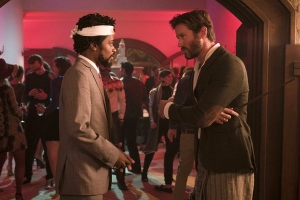 Set in an alternate timeline, the story follows Cassius “Cash” Green (Lakeith Stanfield), an Oakland man, who is living with his girlfriend Detroit (Tessa Thompson), a performance artist and activist in the garage of his uncle Sergio (Terry Crews), and struggling to make ends meet. Four months behind on rent, Cash wants to do something important with his life, he just doesn’t know how and his current financial circumstances aren’t helping. To collect enough scratch to keep up with his rent and put gas in the rusty bucket he drives, he agrees to give an interview at a dingy basement telemarketing company called RegalView with his best buddy Salvador (Jermaine Fowler). While he does get the job quickly he struggles to even keep the customer on the phone, forget selling, however when his colleague Langston (Danny Glover), one of the veteran telemarketers, advises him to utilizes his white voice (David Cross), he immediately finds major success.

While his colleagues led by Squeeze (Steven Yeun) are rallying up in an effort to unionize for a living wage and tolerable work environment, Cassius gets himself promoted to the power caller level which can be accessed only through the gold elevator, leading to a conflict between his friends, his girlfriend and his own moral standards. While rising in ranks, he also ends up attracting the attention of an eccentric, drug-fueled CEO, Steve Lift (Armie Hammer), whose company, WorryFree, hides a dark new idea.

What follows is a lot of police brutality, corporate greed, and the downside to individual ambition. If you think you have the plot figured out, think again. You might feel a little bit crazy by the end, and several scenes are calculated to evince hollering and cringing. The stellar, nearly all-black cast deliver performances that are somehow weighty amid the madness, and most of the film is paced almost like a music video. But it is quite clear that this sharp-witted film has a lot on its mind — racial inequality, economic strife and corporate overreach, to list a few. The heaviness is offset by the way director Boots Riley packages the dramedy: an artful use of neon hues and ridiculous clothes heighten the farcical plot twists with surrealistic flourish. In all its madness, both in anger and absurdity, the film develops into a journey that defies classification.

It’s a hybrid cross between a biting workplace satire and social commentary on complicity and exploitation. The film give us an America where everything is off-kilter. Like Black Mirror, it shows us a world that is scarily similar to our own, warped ever so slightly. In director Riley’s world, large bottles of whiskey open up to reveal smaller ones. A company called WorryFree, offers citizens free food and lodging by housing them in their factories, which resemble brightly colored prisons. The most popular show on television is a reality series called “I Got the Shit Kicked Out of Me!” where people are beaten to a pulp on national television in front of a cheering audience.

Here, many of the decisions mirror real life. Personal success can cost us friends, and political and professional choices may challenge our inherent morals. The film is both provocative and funny, though a bit messy at times. You’ll laugh while you think, or laugh after you think, or think after you laugh, somehow you’ll do both. If its broad arc is familiar stuff about a down-on-his-luck every-man experiencing success but at what cost, at least the plot specifics are unpredictable by dint of director Riley’s imagination.  In an indie field where so many directors favor kitchen-sink realism, director Riley has more on his mind than visual gimmicks. The depictions of telemarketing calls, the gag revealing that Cassius lives in a garage, and the cartoonish contrast between the hell of the call-center floor and the “VIP” area upstairs are clever, but they’re also thematically unified around the idea of shifting spaces—worlds that expand and contract without warning or fairness. Unlike director Jordan Peele’s Get Out, director Riley’s film risks a fair percentage of its potential audience by making Cassius a conflicted, compromised figure, i.e., by letting him make his own mistakes.

But the same percentage of the audience may not take the story’s leap into fantasy territory. The film’s deliberate lack of panache is sometimes a huge strength, particularly in its most chilling set piece, in which Cash is asked to rap in front of Steve and his coterie of rich hangers-on. But when the film introduces its wildest plot twist, it lands flatly; your mileage may vary, but the broad metaphor Riley introduces about the fate of WorryFree’s employees is too shockingly obvious and impersonal for me, shocking and ghastly for the sake of it. Still, the twist is also an admirable risk. Especially as the newest crop of summer blockbusters arrives, it’s hard not to appreciate a film taking such bold narrative swings.

The performances are also quite outstanding throughout. Led by Lakeith Stanfield, who excels in one of his first lead roles, along with Tessa Thompson, who is her usual sexy and elegant. Armie Hammer, Steven Yeun, Jermaine Fowler and Danny Glover also provide ample support. In smaller roles, Terry Crews, Omari Hardwick, Kate Berlant, Robert Longstreet and Michael X. Sommers also leave a mark. The so-called voice work provided by David Cross, Patton Oswalt and Lily James is hilarious. On the whole, ‘Sorry to Bother You’ is a hilarious and thematically engaging satire that also happens to be one of the most bizarre and unhinged films I have ever seen.