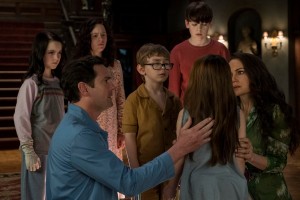 If you’ve seen the breathtaking first season of the Netflix horror series The Haunting of Hill House, then you were no doubt blown away by the show’s sixth episode. Creator Mike Flanagan’s adaptation of the iconic Shirley Jackson novel builds from episode to episode as it crafts a sprawling narrative about the Crain family, spanning two separate time periods, but it all crescendos in Episode 6. Given that this episode—which revolves around the reunion of the Crains at a funeral home in present day and a night when the power goes out in the house in the past—is so substantial to the narrative, Flanagan opted to shoot it in a wholly unique way.

Indeed, Episode 6 is crafted to look like it’s all one single shot, and to do so Flanagan—who directed every episode of Hill House—constructed the episode using only a couple of insanely long takes. This required the actors to play out their scenes as if they were doing a play, instead of being able to cut after a few minutes or after each person’s lines. Everyone had to be on point, and the scene had to transition from present day to past in one seamless shot.

If you’re as curious as I am about how this was pulled off, you’re going to want to watch the video below. It offers an all-too-brief behind-the-scenes look at how Episode 6 was shot, and reveals what the camera operator and crew had to be doing behind the camera while the action was playing out in front.

While it’s great to see what went on, this is another reminder of how sorely needed a “bonus features” section is for Netflix. With so much great original content coming out, I’d love to dig in deep with filmmaker commentaries or feature-length documentaries.

For now, check out the Haunting of Hill House featurette below.