IDW Publishing has announced that it is set to publish a four-issue comic book miniseries based upon Netflix’s hit 80s wrestling series GLOW, which is being written by Tini Howard (WWE) with art from Hannah Templer (Jem and the Holograms: Dimension). 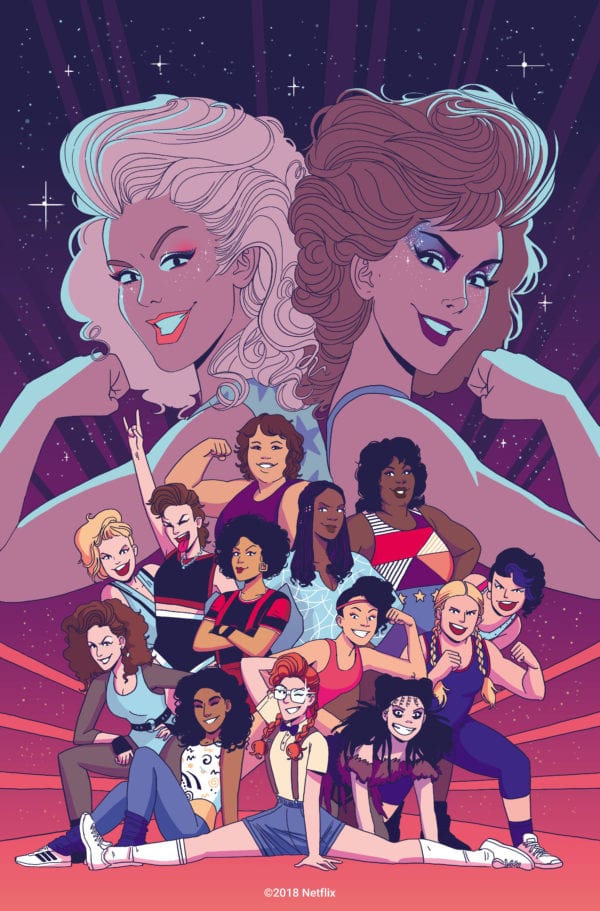 “We’re thrilled to work with IDW to bring new stories to life on the page and in the ring. Can we smoosh 14 women into a little frame? Only time will tell… but we couldn’t be more excited!” say co-creators Liz Flahive and Carly Mensch.

“I’m more than just a GLOW fan, I’m a wrestling fan, too. I’ve written wrestling comics before, and I adore it,” states Tini Howard. “Wrestling and comic books are a natural fit for more than just tights and fights. Each of the gorgeous ladies has either developed her own character or adapted to one thrust upon her, and making that identity her own is not dissimilar to, say, putting on a bat costume.”

“I’m absolutely thrilled about the visual opportunities a GLOW comic offers – there is a wealth of inspiration to be drawn from ’80s animation, fashion, and even wrestling magazines,” adds Hannah Templer. “I also think GLOW, which takes real-world conflicts and settles them within the fantasy of the wrestling ring, provides a really fun arena for expressiveness and visual play!”

Starring Alison Brie, Betty Gilpin, and Marc Maron, GLOW shines the spotlight on a crew of misfits in mid-1980s Los Angeles who reinvent themselves as the Gorgeous Ladies Of Wrestling. IDW’s GLOW miniseries provides a glimpse into the action between-the-scenes, as the less-than-prepared ladies are conned into a fundraising match… against real lady wrestlers!