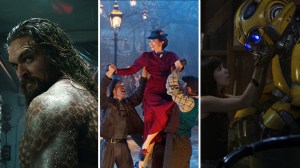 The DC superhero pic, starring Jason Momoa in the titular role, debuted domestically over the weekend to $67.4 million, easily enough to beat Christmas competitors Mary Poppins Returns and Bumblebee. Aquaman began opening mid-December overseas, where it has earned north of $420 million to date. Its domestic total through Monday is $79 million, including sneaks.

Paramount‘s Bumblebee, hoping to revive the Transformers franchise, took in a projected $3.7 million from 3,550 locations million for a four-day gross of $25 million. Hailee Steinfeld stars.

Christmas Eve can be sluggish in terms of moviegoing. Ticket sales should pick up in earnest on the afternoon of Dec. 25 and stay at peak levels through New Year’s Eve. The verdict on the performance of many year-end films will be based on how they fare during the corridor, versus their opening weekend.

One exception is Universal and DreamWorks‘ Welcome to Marwen, which won’t be able to recover after bombing with a $2.4 million debut over the weekend. Directed by Robert Zemeckis and starring Steve Carell, the dramedy will lose $50 million or more. On Monday, the film placed No. 9 with an estimated $488,000 for a four-day total of $2.9 million.

STXfilms‘ romantic comedy Second Act, starring Jennifer Lopez, also opened over the weekend in hopes of serving as counterprogramming to event films such as Aquaman and Mary Poppins Returns. It’s done muted business so far, earning $1 million Monday for a four-day domestic total of $7.5 million. Second Act cost a modest $16 million to produce, according to STX.

The marquee gets even more crowded Christmas Day when filmmaker Adam McKay‘s Dick Cheney pic Vice and the Will Ferrell-John C. Reilly comedy Holmes and Watson open, marking the final nationwide releases of 2018.

From Sony, Holmes and Watson re-teams Ferrell and Reilly after their turn together in Step Brothers. Sony didn’t make the comedy, a twist on Sherlock Holmes and his loyal biographer, available to reviewers pre-opening. Ethan Cohen directed.

One response to “‘Aquaman’ Rules Christmas Eve, Crosses $500M at the Worldwide BO!!!”