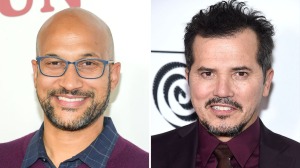 Following on from last week’s casting of Deadpool star Brianna Hildebrand, it has now been announced that Judy Greer (Halloween), Keegan-Michael Key (The Predator) and John Leguizamo (John Wick: Chapter 2) have become the latest additions to the cast of Playing With Fire, where they’ll appear alongside WWE Superstar John Cena (Bumblebee).

The family comedy is being directed by AndyFickman (Race to Witch Mountain) and follows a crew of rugged firefighters who meet their match when they rescue three orphaned kids and find themselves spending Christmas weekend at the station taking care of them.

Greer has several feature film projects incoming in 2019, including the John DeLorean biopic Driven, Richard Linklater’s Where’d You Go, Bernadette, and the Zoey Deutch comedy-drama Buffaloed. Key is set to feature in Toy Story 4, The Lion King and Dolemite, while Leguizamo will appear in Ava Duvernay’s Central Park Five and the crime drama The Night Clerk.