Synopsis – A fishing boat captain juggles facing his mysterious past and finding himself ensnared in a reality where nothing is what it seems.

My Take – The beginning of the year is usually known for being a dumping ground for studios who release films they are quite sure are not going to work in any way possible. This list usually comprises of B action flicks, erratic comedies and jump scares filled horror films, but what was surprising this year was the inclusion of this Steven Knight film, whose last directorial effort was the excellent 2013 film, Locke.

Knight is mainly known for his writing stints which include Peaky Binders, Eastern Promises, and Dirty Pretty Things among others, in short a resume that lends itself to certain expectations. Added to the fact the film contains a top-notch ensemble cast that includes Matthew McConaughey, Anne Hathaway, Jason Clarke, Djimon Hounsou and Diane Lane, you end up expecting something indigenous.

However, despite the fact that the film sells itself as a 90s style noir thriller with a contemporary twist, it all somehow ends up being a hypnotically bizarre, bug-eyed nuts, deliciously stupid cluster of a film that you might just hate or simply be left confused by. I understand a head-turning twist is hard to accomplish in any film, but here the screenplay lives and dies by its twist, largely to the detriment of the film.

Any potential for the film to work is bogged down by its self-congratulatory pats on the back for being clever more than anything else. Other than being completely nonsensical, the dialogue are also quite cringe-worthy and while writer/director Steven Knight tries his best to make the film a dramatic and thrilling spectacle, it ends up lacking in everything. 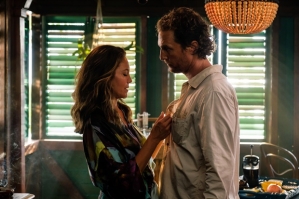 The story follows Baker Dill (Matthew McConaughey), a captain of boat named Serenity, who runs a charter fishing business. A war veteran and current recluse on the secluded Plymouth Island, often just drinking or frolicking with Constance (Diane Lane), a local beauty, Baker has hidden himself away—away from his past, his responsibilities and, sometimes, his own thoughts.

However, when he heads to sea, along with his first mate Duke (Djimon Hounsou), it’s either with tourists to catch a prized fish or two and reel in the cash or to simply hunt a behemoth of a fish, one he’s named Justice. This hunt, this compulsive desire, consumes his every waking moment, enabling him to disconnect from his former life.

That is until he finds his ex-wife Karen (Anne Hathaway) waiting for him at the bar, with a proposition that she’ll give him $10 million in cash if he’ll simply toss her abusive and filthy rich and thoroughly obnoxious second husband Frank (Jason Clarke) overboard as food for the sharks, thus saving her and Dill’s teenage son, Patrick (Rafael Sayegh) from Frank’s wrath. With the bank close to foreclosing his boat, Dill must choose between saving his son and saving Serenity, between right and wrong on an island where the lines of morality are often blurred, and nothing is as it seems.

While the premise sounds pretty clear-cut, here, writer/director Steven Knight, who also wrote the recent bomb The Girl in the Spider’s Web, tries to take viewers into Vanilla Sky or Inception territory, where something about reality seems a bit off. While the first half of the oddly paced film turns out to be exactly how the trailers sold it, a sexy thriller, it’s clear that director Knight has more on his mind. The intermittent flashes of Dill’s son seen through the child’s computer screen as he plays computer games and the strange swoops of the camera hint at something quite odd.

The strangest here is the appearance of Reid Miller (Jeremy Strong), a salesman who just runs around in a suit and a briefcase hoping to have a word with Dill. Then comes the midpoint twist where the film film reveals itself as an ambitious, high-concept cocktail of disparate genres geared toward an audience that appreciates boldness and originality. As shaky as the film, characters, and dialogue were, this twist turns it into a convoluted mess that changes everything we have watched to this point.

It turns out that Dill is a character in a video game and the island is a collection of mini-games, all being played by a very real young boy with a dead father and a new, abusive stepdad, and because the game doesn’t involve any violence, the programming is pushing back against Dill, and Reid is the rules, sent to ensure that Dill stays the course and doesn’t commit murder. This twist, rather than pleasantly surprising us with a shocking moment that adds layers to what we’ve already seen, makes us feel so misled that we realize we’ve wasted our time investing in the characters.

In other words, the reveal removes all stakes from the film we think we’ve been watching up until this point. And no, the film still does not make a whole lot of sense in the third act, even though it provides us a whole lot of clumsy and preposterous explanations. The film is so wrapped up in its own ingenuity that it doesn’t realize its cleverness is also its biggest weakness simply because it doesn’t know what it aims to be.

There’s also a sense of arrogance in its delivery of twists and the dialogue alone is unbearably bad, with Baker blaming his fishing partner, Duke for their bad luck following the death of his wife. After he has sex with Karen, he says, “That’s it … I win,” like it’s some sort of contest. It’s atrocious. What’s also concerning is the treatment of Karen and the things she says make it very obvious it’s written by a man and she is usually disrespected and painfully used by both Baker and Frank. The film turns trauma into an outlet, but primarily for Patrick. The trauma that Karen has to face is never really addressed beyond being a plot point because once the twist is disclosed, her point of view becomes invalidated by the narrative and so it becomes far more about Patrick’s pain than hers.

In-between erratic camera movements, cartoonish supporting characters and a serious moral choice, the film also has Baker embark on a voyage of self-discovery. While coping with his probable borderline personality disorder, he swims naked, sees an apparition, meets a persistent salesman in a black suit, and acts out in two scenes that channels Tommy Wiseau.

Writer-director Steven Knight was probably going for something like Inception or Lost some other mind-bendy head-trip when he came up with this film, but something seriously went wrong in the transition. While I can easily see a certain (small) portion of the viewing populace looking at this as something so-bad-it’s-good, it’s not. It’s just bad.

At the center of this mess is Matthew McConaughey, one of the most cinematically-schizophrenic actors working today.  When he dives into the right films, he carries them with a sly bravado and comfortably commands our journey into big screen gems. Lately, he has been heading towards a downhill by appearing in one stinker after another, and this one is no different as he constantly hams it up for 106 minutes.

Somehow, Anne Hathaway makes her role work here as the femme fatale and is able to embody the film’s style and embrace the insanity with aplomb. McConaughey and Hathaway worked well together in Interstellar, another reality bending film, so their lack of chemistry here is a bit baffling. Diane Lane practically disappears from the final third, and hardly gets a chance to leave a mark.

Jason Clarke is comically cruel, barking insults at everyone around him while waving money in their face. Jeremy Strong is a particular treat to watch as Djimon Hounsou is criminally underutilized. On the whole, ‘Serenity’ is a trippy and ludicrous film which despite the talent attached turned to be a major catastrophe.