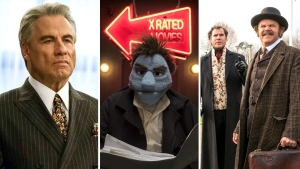 The Golden Raspberry Award Foundation has announced the “winners” of the 2019 Razzies, honoring the very worst cinematic achievement from the past twelve months.

Meanwhile Donald Trump picked up a couple of awards for Death of a Nation and Fahrenheit 11/9 – Worst Actor, and Worst Screen Couple (shared with His Self-Perpetuating Pettiness), while Melissa McCarthy was named Worst Actress for The Happytime Murders and Life of the Party.