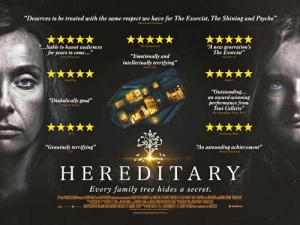 A24 has released the first poster for the next film from Hereditary writer/director Ari Aster, and it’s… bright and colorful and cheery? Hereditary hit hard when it opened last year, as Aster’s meticulous attention to detail and Toni Collette’s harrowing performance resulted in a horror film that is truly unforgettable in the worst way. There are images in that movie that will haunt me for the rest of my life, so imagine my surprise at this first poster for Midsommar, Aster’s next film.

The new film covers somewhat familiar territory, as it follows a couple (played by Jack Reynor and Florence Pugh) who travels to Sweden to visit their friend’s rural hometown, which is famous for its mid-summer festival. But what begins as an idyllic vacation soon turns into an increasingly violent and bizarre competition at the hands of a pagan cult. Will Poulter and The Good Place actor William Jackson Harper also star.

I love the bright and alluring nature of this poster. Knowing that it comes from the same guy behind Hereditary, there’s almost an even greater sense of dread. You just know things are not going to be all fine and dandy, and while there’s the illusion of freedom and idealism in this open flower field, the group of figures in the background certainly has a bit of a haunting quality to it.

Check out the first Midsommar poster below. A24 will release the film in theaters on August 9th.