Synopsis – It is a story of a young boy Surya who has a rare condition of Congenital Insensitivity to pain meaning he can not feel pain, and he sets out to learn martial arts and hunt down muggers.

My Take – On paper, this film which released last weekend, seems like everything that would be a product out of strict Bollywood textbook. We have the quintessential hero with a tragic backstory, the feisty heroine and a villain who shows no end to the nastiness he can press upon, but here, the approach to story-telling is so unique it that it immediately turns out to become something we have never seen before.

Marking the debut of Abhimanyu Dassani, son of Maine Pyar Kiya actress Bhagyashree, this film was the first Indian production ever to play in the Toronto International Film Festival‘s genre-friendly Midnight Madness section, where it ended up winning the Audience Award, and gained fame as a mad, fun, quirky tribute to the Kung Fu films of the yore and the era of VHS and VCP.

Helmed by writer/director Vasan Bala who has been around writing features (Raman Raghav 2.0, Bombay Velvet), making shorts and ad films for a while now, here creates a mad, bizarre, eccentric, and even absurd but an insanely entertaining world of adventure that does both, parodies the action / superhero films and reveres them in equal proportion by giving them a Wes Anderson-style homage.

While the film may not make sense in some parts, as it is unashamedly zany and eager to please, the humor very broad and the sprawling plot too baggy for an action-driven piece. Yet it does manage to work quite well, all thanks to its acerbic dialogue, sharp in-jokes, and memorable characters and without a doubt, some insane action sequences.

The story follows Surya, a geeky boy who suffers from congenital insensitivity to pain, in the sense, he feels no pain no matter what the injury is. After losing his mother soon after his birth, Surya’s childhood is filled with sunshine and bullies, an addle-brained father (Jimit Trivedi) and a doting maternal grandfather (Mahesh Manjrekar), and the love of his neighbor/best pal Supri, who he believes who can destroy obstacles with her laser eyes.

Growing up on a collection of vintage VHS action films from the 1970s and ’80s, Surya dreams of developing his martial arts skills to become a crime fighting superhero and tracking down the street muggers who caused his mother’s death, however a confrontation with Supri’s drunken bully of a father backfires and Surya is forced to flee the neighborhood.

A decade later, despite now being an adult Surya (Abhimanyu Dassani), still fantasizes about fulfilling his dream, and once he returns back to the main city of Mumbai, he runs into an adult Supri (Radhika Madan), who is now a two-fisted beauty as she trained under his former role model, Karate Mani (Gulshan Devaiah), the one-legged former martial arts star. Still keen to do good in a bad world and worried that his childhood hero may not be as invincible as he thought, Surya like goes crazy the moment he decides to intervene in a long running feud between Mani and his twin brother Johnny (Gulshan Devaiah), a sleazy gangster with an army of combat-trained private security henchmen.

What follows is packed with homages to old-school analogue action classics, from Bruce Lee to John Woo, The Terminator to Die Hard. Even the film’s title comes from a line in the 1985 Hindi blockbuster Mard, which starred Amitabh Bachchan and Amrita Singh. A great film has great characters in interesting situations and this is one such film. Here, Surya’s world is populated by goofy characters that dial up the ‘extra’ to a hundred and then some, what we get to witness is essentially an origin story. There’s a pastiche quality to Surya’s adventure, a personal edge to the madcap humor, and an anything-goes attitude towards the plotting.

The use of the voiceover in films to string together sequences is a well-worn device, but this film uses it well to set up its premise. A scene plays out and is then replayed with another outcome for post-modern effect. Surya’s droll commentary is filled with pop culture references, quotations of action film titles, and real or imagined aphorisms attributed to martial arts legends. Did Bruce Lee really say that when the moment of reckoning arrives, it is best to be bare-chested? Of course he did. What makes this one more fun to watch is that the film wears the masala film templates up its sleeve, so the writer gives us enough opportunities to play a “spot the cliché” game with the audience (the film even literally introduces Mani and Jimmy as the two “clichés” of the film). The film allows the audience to laugh with the outrageousness of a potboiler, not at it.

Though the film displays a lot of fanboy moments, these instances are rooted in a more real, relatable world. The film is an ode to the Mumbai-living Middle class and throwing us some traditional Bollywood-ish sequences in such a milieu makes the homages even more genuine. Powered by a steady soundtrack of zingy pop tunes in multiple styles, the film offers undemanding, mindless enjoyment. 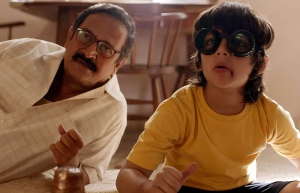 Director Bala and cinematographer Jay Patel give the film a vivid comic-book look with sunny colors and kinetic camera moves, from Spielbergian crash zooms to an arresting aerial shot that rockets upwards from a Mumbai rooftop into outer space. The film is overloaded with unique action set pieces. Choreographed by Eric Jacobus and Dennis Ruel of California-based specialists The Stunt People, these scenes are dynamically staged but pleasingly low-tech, with scant trace of the CGI or gravity-defying wire effects that dominate contemporary chop-socky thrillers. Though, like every typical Bollywood action film, the film also has the protagonist(s) beat up a whole group of bad men at once. And, ironically, this is exactly where it becomes more than just run of the mill action film.

But the film is not without its flaws. For its run time, the film is a bit too high on the hijinks, and some serious trimming would have saved the narrative from spinning out of control. The film, though self-aware, lacks novelty in the plot progression. It falls quickly into the good vs evil tropes and pretty much turns out how you’d expect it to. Also I had a problem with how Supri has an unsatisfactory track of her own that purports to say something meaningful about domestic violence, but never quite does.

Yet despite all this, the film is so damn unique you just keep glued to the seat until the end credits roll in. And a major factor for that to happen is its awesome cast. The bulky man of the title is but a child, and Abhimanyu Dassani is perfectly cast. Dassani is impressive in his first film. He reportedly trained for 4 months to fit the part and it shows on screen. His stunts are awe-aspiring and Dassani brings in a child-like innocence to his character Surya who is mostly devoid of any emotions.

Radhika Madan also deserves accolades for carrying such a layered and difficult role effortlessly. Madan, who impressed one and all in her debut performance in ‘Patakha’ packs a solid punch with her role. Mahesh Manjrekar is a gifted actor in the right role, and director Bala beautifully uses his fleshy face, beer belly and ear for Mumbai patois. Jimit Trivedi too is hilarious and so are the many supporting characters who add value every time they appear on screen.

However, the film clearly belongs to Gulshan Devaiah, who has two difficult characters to portray on screen. One is that of one-legged Karate Mani who is soft, guilt-ridden and loyal to his job and the other of the mad, psychotic, evil Jimmy. Two extremely contrasting characters but Deviah completely owns the screen whenever he is in it. Devaiah is an irreplaceable component to the film, bringing such a great energy to every scene he’s in. The only thing better than Mani’s action scenes, is Jimmy’s comedic timing, packing bigger punches than the film’s literal fist fights. On the whole, ‘Mard Ko Dard Nahi Hota’ is an insanely outlandish and wacky film that is truly different and quite an enjoyable one.