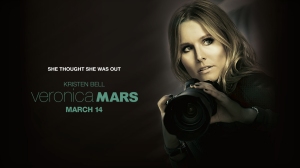 You just can’t stop Veronica Mars. The beloved SoCal neo-noir by way of high school drama launched on The CW way back in 2004 and was gone too soon just two years later when the network pulled the plug after a truncated third season. But Marshmallows don’t give up that easy and ten years later, Veronica Mars became one of the first long-gone projects to find their way back through crowdfunding. One successful Kickstarter campaign later and fans finally got to return to Neptune in by way of feature film. But now it’s time for the real goods, because everybody’s favorite intrepid detective is back with a new Hulu series.

Veronica Mars will return on the streaming service with eight episodes on July 26, and don’t let the summer release date fool you, because the first teaser trailer makes it clear we’re headed into the thick of some Spring Break shenanigans. Veronica’s even got her trusty taser handy.

Hope we can still be friends. #VeronicaMars returns July 26th, only on @hulu. pic.twitter.com/AIM7NRVJEz

Here’s the official synopsis for the long-awaited Season 4 of Veronica Mars:

Spring breakers are getting murdered in Neptune, thereby decimating the seaside town’s lifeblood tourist industry. After Mars Investigations is hired by the parents of one of the victims to find their son’s killer, Veronica is drawn into an epic eight-episode mystery that pits the enclave’s wealthy elites, who would rather put an end to the month-long bacchanalia, against a working class that relies on the cash influx that comes with being the West Coast’s answer to Daytona Beach.