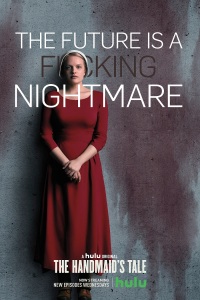 It’s odd to look to Hulu’s hit drama series The Handmaid’s Tale for a hopeful spark in these dark times, but that’s just what the new trailer for the upcoming third season has to offer us. June/Offred made quite the head-scratcher of a decision at the end of Season 2, but this trailer teases just what her plan is all about in Season 3. And these next episodes will see her carrying out said plan, though the ultimate end remains a mystery for the moment. Still, the biggest departure here is the tone, one of hopefulness in the face of continued oppression, and we’re here for it.

Take a look at the new, significantly more hopeful trailer for Season 3 of The Handmaid’s Tale below:

Blessed be the fight. The Handmaid’s Tale returns June 5, only on Hulu.

Here’s the official synopsis for The Handmaid’s Tale:

Adapted from the classic novel by Margaret Atwood, The Handmaid’s Tale is the story of life in the dystopia of Gilead, a totalitarian society in what was formerly the United States. Facing environmental disasters and a plunging birthrate, Gilead is ruled by a twisted fundamentalism in its militarized ‘return to traditional values’. As one of the few remaining fertile women, Offred (Elisabeth Moss) is a Handmaid in the Commander’s household, one of the caste of women forced into sexual servitude as a last desperate attempt to repopulate the world. In this terrifying society, Offred must navigate between Commanders, their cruel Wives, domestic Marthas, and her fellow Handmaids – where anyone could be a spy for Gilead – all with one goal: to survive and find the daughter that was taken from her.