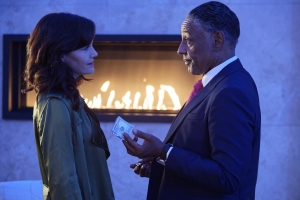 Cinemax has released the first teaser for its upcoming crime drama Jett which stars Carla Gugino in the lead role as a word class thief, who after being recently released from prison is forced to back into a life of crime. Joining Gugino in the cast is her The Haunting of Hill House co-star Violet McGraw along with Giancarlo Esposito (Breaking Bad), Elena Anaya (Wonder Woman), Michael Aronov (The Blacklist), Gus Halper (Happy!), Lucy Walters (Power) and Gil Bellows (Patriot); watch it here:

“JETT stars Carla Gugino (San Andreas, The Haunting of Hill House) as world-class thief Daisy “Jett” Kowalski. Fresh out of prison, she is forced back into doing what she does best, and a cast of morally ambivalent, dangerous and eccentric criminals, from budding femme fatales to compromised law enforcers, are determined to exploit her skills for their own ends.”

Jett premieres on Cinemax this June.