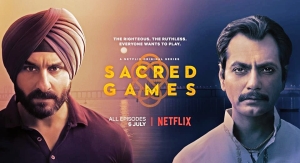 After the super success of season 1, the makers of Sacred Games are all set to entertain the audience with its season 2 and piquing the curiosity of fans, the first promo of season 2 has been unveiled.

The official Twitter handle of Netflix India shared the promo on social media and wrote, “Season 2 is coming. Put your chattris in the air. #SacredGamesS2”.

In the promo, we can see the new additions to the ensemble cast of Sacred Games, Ranvir Shorey and Kalki Koechlin are also going to be part of this season.

Sacred Games season 2 is probably one of the most anticipated shows.

The first season of the show was directed by Anurag Kashyap and Vikramaditya Motwane. It is based on Vikram Chandra‘s novel of the same name.