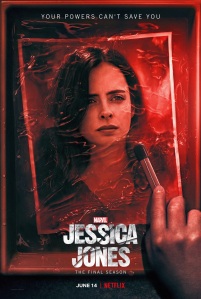 Luckily, we’re going out with a quality show like Jessica Jones, and the third season was always crafted as some sort of conclusion given that showrunner Melissa Rosenberg always planned to depart the series after her work on Season 3 came to an end.

Following a mixed bag Season 2 that introduced Jessica Jones’s mother as both co-star and antagonist, the story this time around finds Jessica and Trish teaming up to take on a psychopath played by Jeremy Bobb, who wowed on the supremely underrated The Knick and most recently turned heads on the Netflix series Russian Doll. Adding intrigue to the mix is Benjamin Walker, an underrated talented probably best known for the misguided Abraham Lincoln: Vampire Hunter.

I’ve always found Jessica Jones to be the most compelling and most satisfying of the Netflix Marvel shows, so I’m looking forward to checking out this third and final season. Here’s hoping things go out on a high note.

When Jessica (Krysten Ritter) crosses paths with a highly intelligent psychopath, she and Trish (Rachael Taylor) must repair their fractured relationship and team up to take him down.  But a devastating loss reveals their conflicting ideas of heroism and sets them on a collision course that will forever change them both.